In the UK, KFC’s now infamous ‘Halal Trial’ has taken a turn that may well prove to be a pivotal one in the shift of Halal into the mainstream. In any event, it has uncovered a series of misconceptions that can now be seen in a better light.

KFC’s 80-plus restaurants that are offering a Halal menu were all certified by the Halal Food Authority (HFA), and KFC went to some lengths on their website to

There have been three basic kinds of responses to this move.

What has recently come to light is that the chickens were slaughtered by a mechanical process, and not done by hand by a Muslim slaughterman. Both stunning (especially for poultry) and mechanical slaughter are highly controversial issues for Halal compliance, but the general consensus is that while stunning might be disapproved of due to the possibility of birds dying before slaughter, it is generally considered acceptable by a majority of Ulama around the world. 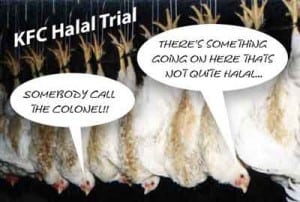 Mechanical slaughter, on the other hand, while it is acceptable to some, is generally considered unacceptable, and is excluded from most Halal standards, and notably Malaysia’s MS1500 standard was updated in 2008 and now does not permit mechanical slaughter for poultry.

HFA’s ruling on mechanical slaughter can be seen now to have been rather misleading for KFC, who should really have done more homework on the whole issue. Clearly KFC, as per general industry practice when it comes to Halal, have tried to do a little as possible to be Halal compliant and thereby access the considerable Muslim consumer market in the UK.

Indeed, now we can better understand KFC comments on their website that assures customers that the very same chickens that everyone finds so finger-licking good are also being served up in the Halal outlets. As it turns out, not only are they the same chickens, but they are being killed using exactly the same process as the non-Halal birds, other than their being a Muslim ‘monitor’ somewhere on the premises.

Whether the tasmiyyah was done by tape recording is not yet clear (if anyone knows, please tell us…) but it is generally unacceptable anyway, and there is no way one monitor could say ‘Bismillah Allahu Akbar’ 20,000 times per hour…yes, that’s how fast the line goes.

So, while the customers who mourned the loss of the Big Daddy have a legitimate complaint that they now have to go another few miles for their take-away, the ‘barbaric’ argument can now falls apart; the chickens were treated the same as all the rest of the KFC birds

The Muslims in general have responded with a commendable degree of restraint and dignity, and following a constructive meeting between the Lancashire Council of Mosques and KFC representatives, a clear and articulate letter to the general Muslim community was published on 16th April declaring that the KFC outlets were not considered Halal.

Ultimately, there are no real villains in this drama. It is evidence of the ongoing evolution of the Halal market in the UK, and proof that companies that want to enter this market need to do their market research in a deeper way, and not just opt for the line of least resistance.

Given KFC’s involvement in the Halal sector in many other parts of the world, one may wonder why they did not take advantage of the available expertise. KFC Malaysia, after all, supplies non-stunned chickens for their Brunei outlets, as per Brunei’s Halal Standard, even though they use stunned chickens from the same supplier for their outlets in Malaysia and Singapore.

It is not yet clear how this will play out, and it may well become something of a land-mark case for the future of the Halal industry.

As a footnote, one suspects that many of the more vocal groups that have been shouting about barbaric practices and excessive pandering to immigrants have probably been eating Halal curries and kebabs for the past twenty years without thinking twice. Its only when Halal is applied to good old British fare…oh actually, I guess I mean greasy American fast food… that it really strikes a nerve.

Perhaps the only thing stranger has been the parallel drama across the Channel over the Quick restaurant chain’s decision to go Halal-only in eight outlets in France. It is one thing for the English to defend their special relationship with KFC, but when the French start defending their right to eat American fast food in the name of French national identity, you know there is something deeper going on.

And that is a whole autre histoire…