Prime Minister Yingluck Shinawatra has expressed confidence the Thai food industry will remain the country’s top revenue earner despite any impact the euro-zone crisis may have. 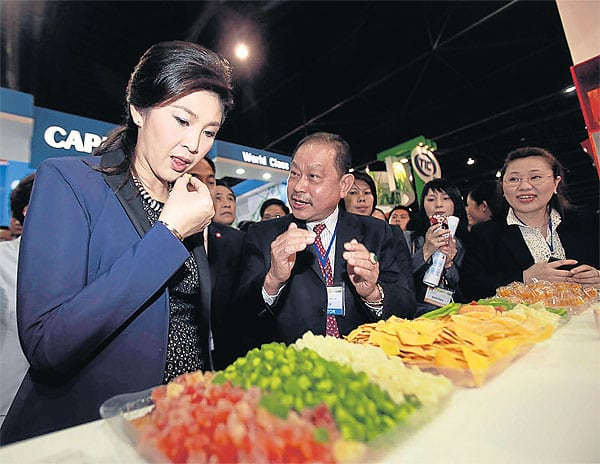 She said yesterday that the demand for food products in international markets has continuously increased since the beginning of this year and this consumption will help to push up growth in almost all categories.

This year’s revenue from food exports excluding major commodities such as rice and sugar is estimated at US$28 billion, up by 12% from last year.

“This is a very promising sign for both the production and export sectors. Now is the time for them to make the most of this business opportunity,” she said at the opening of Thaifex _ World of Food Asia 2012.

Organisers expect the five-day event ending on Sunday will fetch US$420 million.

Ms Yingluck said the Thai government has a standing policy of positioning Thailand as the Kitchen of the World.

Thai agricultural and food products are highlighted, while foreign investment in the local farm sector is promoted vigorously.

“This initiative creates added value for not only our agricultural sector, but also the industrial and service sectors,” she said.

His ministry will discuss the issue with Kittiratt Na-Ranong, a deputy prime minister and finance minister, in order to minimise the impact against Thailand, he said.

A greater focus on Asean markets is possible in order to ensure this year’s growth target of 15%.

Phongsak Assakul, chairman of the Thai Chamber of Commerce, said he supports the govenment’s policy of standardising the quality of Thai food sold abroad.

Promoting food ingredient exports is an effective way of beefing up taste, he said.

Mr Phongsak said he also encourages the government and food processors to concentrate more on making halal food in order to tap into Asean’s Muslim consumers, which number more than 250 million.

In fact, the overall Asean population of 601 million is a good alternative to ailing Europe as well, he added.