PETALING JAYA: The Chemical Company of Malaysia Bhd (CCM), which recently received certification to produce halal pharmaceutical products, is looking to turn around its fortunes after two years of chalking up losses.

CCM shifted its core business from the production and distribution of fertilisers to manufacturing pharmaceutical products last year. The change in the core business contributed to losses in the previous years ending 2014 and 2015 respectively.

The fertiliser business was a money spinner but it had been beset by weakening demand from clients in the palm oil sector.

“The recent rally in prices is a short term reaction to the halal angle. It did not take much to push the stock price to new highs given the stock’s illiquidity,” a remisier of a bank-based brokerage told StarBiz.

CCM’ rose to its highest in more than four years just prior to receiving the certification. Between Jan 25 and Feb 2, the day CCM achieved the certification, its stock price rose 32% from 90 sen to RM1.19.

Long seen as an undervalued gem but with subdued prospects, CCM’s stock is still trading at a discount to its net asset per share value of RM1.46 despite the recent rally.

Additionally, the group’s public-listed subsidiary CCM Duopharma Biotech Bhd saw a similar spike in its share price. Over the same period, its stock price rose from RM1.92 to RM2.09. All of CCM’s pharmaceutical operations are currently housed under CCM Duopharma following a consolidation exercise in 2015. 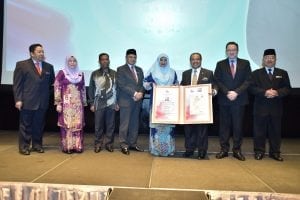 The halal certification is set to boost CCM’s prospects in the controlled or prescriptive medicines segment, also known as ethical products. The group disclosed in its latest quarterly filing that it saw lower demand from the ethical sector last year which subsequently drove its revenue down.

Given its sole status as a halal-certified medicine manufacturer, the group may become frontrunner for future pharmaceutical contracts from the government sector which tend to offer higher margins.

The pharmaceutical business, which has been pegged as the key growth driver by the group, manufactures and produces more than 200 generic products and more than 20 over-the-counter brands.

In a statement, CCM chairman Datuk Normala Abdul Samad said that due to the certification’s international recognition by halal certifying bodies, the group is poised to make inroads into the global halal pharmaceutical industry which is estimated to be worth about US$75bil.

“This recognition is an important milestone for the CCM in becoming the leader in pushing forward the importance of halal pharmaceuticals in Malaysia as well as at the global level. This industry has been given recognition by the Government as a strategic industry which requires promotion,” she said.

The pharmaceuticals segment contributed about 40% of CCM’s revenue for the cumulative nine months ended Sept 30, 2016. The segment reported RM238.91mil in revenue for the period.

In comparison, the chemicals business recorded a revenue and net profit of RM221.99mil and RM28.53mil for 9MFY16.

From a business standpoint, it is vital for CCM to quickly plug the revenue gap left behind by its exit from the fertiliser business which had been loss-making since 2013.

In June last year, it announced the disposal of the division to Hextar Fertilisers Group Sdn Bhd for RM48.5mil. CCM added that it intended to place greater attention on enhancing the profitability of its pharmaceuticals and chemicals divisions.

Without the segment, CCM’s revenue is expected to drop by about 20% based on the segment’s historical earnings contribution to the group.

Permodalan Nasional Bhd, which is undertaking a restructuring of bigger holdings such as Sime Darby Bhd and UMW Holdings Bhd in a bid to spur dividends, is the biggest shareholder in CCM with a 70% stake.

The group’s substantial cash pile of RM303.55mil as of Sept 30 last year also means that it can afford to pay dividends during tough times. In FY15, when it recorded a RM76.67mil net loss, CCM paid out a single interim dividend of 2.5 sen per share, or about RM11mil in total distribution.

CCM also offers a 12-month trailing dividend yield of 4.35% according to Bloomberg data prior to the recent stock price rally.

Last Friday,  CCM chairman Datuk Normala Abdul Samad(fourth from right)  said that due to the certification’s international recognition by halal certifying bodies, the group is poised to make inroads into the global halal pharmaceutical industry which is estimated to be worth about US$75bil.