First there was All in the Family. Then the Cosby Show. Now, there’s Funny or Die’s new web sitcom that poignantly satirises the Muslim-American experience 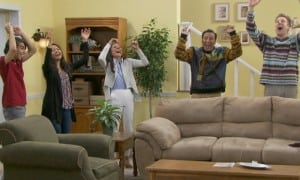 It’s an American tradition as old as post-cold war memory itself: the annual block party rivalry of who can turn their home into spookiest haunted house for Halloween. The more offensive, the better. “You’re a ghost in a burqa,” a father tells his daughter, “What would scare white people more than that?” Unless, of course, you’re a Muslim family inviting your white neighbours to a haunted terrorist bootcamp – and those same neighbors also happen to be fans of Homeland.

This is just one of the slapstick premises in Aasif Mandvi’s new web series Halal in the Family, which premiered its first four episodes this month on Funny or Die. Taking its cue from landmark TV shows such as the Cosby Show and All in the Family, the show poignantly satirises what it’s like to try to be a Huxtable-esque family that just happens to be Muslim – in an Archie Bunker America where no one just happens to be anything.

Alongside House of Cards alumnus Sakina Jaffrey, Mandvi stars as Aasif Qu’osby, a typical “Baba knows best” character who is so desperate to fit in as an American, he’ll bring in a political consultant to make over his son’s class president campaign platform into a fight against Sharia law at school and even “dadsplain” his daughter’s classmate on the proper way to put up racist Facebook posts against Muslims. “If you’re going to stereotype us,” he exclaims, “at least get it right!” Like many classic sitcom fathers, Aasif is perpetually the joker, but never the joke, a character who, Mandvi told the Guardian, is “responding to the culture at large. The family is responding to the misinformation, to the bigotry … the comedy comes from the fact that they’re so afraid of being misidentified or misunderstood.”

Deliberately avoiding the TV network, Mandvi instead decided to premiere Halal in the Family on the web, where he felt “so much great content is being created now” and “the audience can find it”. The approach speaks volumes when you look at TV’s history in poorly representing racial diversity, and especially when you take into account the backlash against the ethnic roles on some of this season’s most popular network shows.
Advertisement

The sad reality is this: up until now, there hasn’t been a Muslim-American family sitcom in the States. ABC came close about five years ago when it greenlit Funny in Farsi, a sitcom based on Firoozeh Dumas’s memoir of growing up Iranian in America. Yet the pilot never aired. As hard as it is for any program to make it on TV, shows featuring people of colour face an even greater uphill battle, often not given the longevity they need to keep up their ratings – because executives are still driven by ratings and profits, not diverse programming.

“The level of appetite is out there for something like this,” Mandvi says. “People desperately want to have these conversations.” And not just American Muslims. “The problem with the mainstream media is there’s no room for nuanced, complex conversations in terms of Middle Easterners and Muslims, and the millions of identities that that entails.”

Halal in the Family is not politically correct. It frequently relies on deliberately off-colour gags – deliberately used “as a familiar access point for people to get into this world so we can talk about some more issue-based stuff”. Through humour, the show gives its viewers a sharp and witty picture of what it means for today’s generation to understand “Muslim” and “American” as two parts of the same identity.

In the episode Spies Like Us, Aasif meets his son’s white Muslim math teacher Wally, and though Aasif initially suspects him of being a spy, the broader message deals with the struggle that many American Muslims face in being seen as perpetual foreigners. By breaking down cliches and depicting non-stereotypical Muslim characters, it reflects the range of cultures that fall under Islam’s umbrella.

The show never explains Muslim identity in apologetic terms, or attempt to turn its episodes into PSAs on the harmlessness of halal. By setting themselves apart as “not that kind of Muslim” (a line that Aasif yells out at the end of the opening credits), the show doesn’t just look at what it’s like to be different as a Muslim – it also explores what it means to different from other Muslims. Its hyper-awareness of differences and perceptions put Halal in the Family in the same tradition as recent ABC shows such as The Neighbors and Suburgatory, as well as the network’s current hit sitcoms Fresh Off the Boat, Black-ish and Cristela – all outsider comedies meant to give us a new perspective on the majority culture as the characters strive to find their place within it.

The demand for a show like Halal in the Family is not only existent, it’s desperate to engage in the larger dialogue of how cultural identity contributes to the broader tapestry of America. And when conversations get boiled down by into soundbites to promote sensationalism and fear-mongering, the need for more nuanced perspectives only becomes more urgent. Halal in the Family is not Muslim America’s saving grace, nor does it ever intend itself to be. But its success is a critical step in showing the compassionate, yet conflicted identities beyond the cliches. The best way to fight a culture of fear is with a culture of enlightenment, and what better way to do that than to give the media images of Muslims as Americans who just happen to have a different history, but want to use it to contribute to a united, but variegated future.