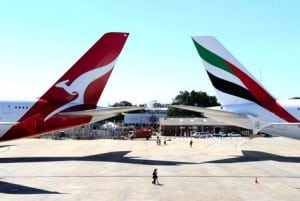 Australian airline Qantas Airways has removed food items containing pork and alcohol from its in-flight menu on routes that transit through Dubai.

The move comes following the launch of a major global alliance between Qantas and Dubai-based Emirates Airline that came into force on April 1. The tie-up will see the two carriers collaborate on ticket pricing, scheduling and frequent flyer programmes.

The alliance has seen Qantas switch its hub for European flights from Singapore to Dubai, a Gulf emirate which adheres to Sunni Islam and strictly controls distribution of alcohol and pork, both of which are forbidden under the religion.

A Qantas spokesperson confirmed to Arabian Business via telephone on Sunday morning that the airline has removed all food products containing pork and alcohol on services to and from Dubai. The carrier will however continue to serve alcoholic drinks on these routes.

Qantas, which makes a loss on its international routes, said that following the announcement of the Emirates deal it had seen a sixfold increase in bookings to Europe on the joint network in the first nine weeks of sales compared to the same period last year.

The number of Emirates customers booked to travel on Qantas’ domestic network is almost seven times higher than under Qantas’ previous partnership arrangement in the same nine week period, a statement said.

Combined the two airlines will offer 98 flights a week between Australia and Dubai. Qantas will continue to operate its A380 services from Sydney and Melbourne through to London.

The partnership is expected to benefit Australian tourism, with both airlines developing a global marketing campaign to promote Qantas destinations that are now part of the extended Emirates network.