Australia’s trade minister has backed new Indonesian laws that will require all meat sold in the Muslim nation apart from pork to be halal certified.

From October 2019, Australian beef cattle and sheep will have to have their throats cut, before they are stunned, to be widely marketed in the world’s biggest Muslim country.

Trade Minister Steven Ciobo, who visited Indonesia for three days last week, has backed the new laws which had input from religious clerics. 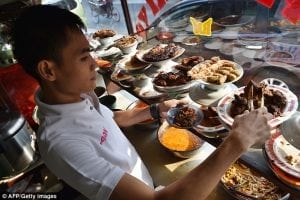 ‘Halal product assurance is important to Indonesian consumers,’ a spokeswoman for the trade minister told Daily Mail Australia on Monday.

To qualify as halal, live animals must have their throats cut as part of the slaughter.

This occurs shortly after the livestock is stunned in many cases.

However, animal rights activists in Australia have been campaigning to close a loophole that allows some halal abattoirs to refrain from having to stun beef cattle before the slaughter ritual.

In October 2014, outgoing Indonesian president Susilo Bambang Yudhoyono signed a law stipulating that by 2019, halal certification would be compulsory on all food imports into Indonesia.

The Indonesian Ulema Council, also known as the Majelis Ulama Indonesia, is the peak body for the nation’s Islamic clerics which administers halal certification.

This group is dominated by Sunni Muslims, who often clash with other Muslim denominations including the more secular Ahmadiyyas.

‘With a population of more than 255 million and an economy approaching US$1 trillion, there is enormous scope to expand our trade with Indonesia – our 13th largest trading partner,’ he said.

Australia has had third-party halal certifiers since 1980.