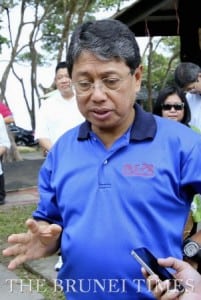 collaboration with Thailand in the halal food industry, its minister said.

“We do not want to launch something without making the ground firm in terms of certification and getting halal ingredients from Thailand as well as from neighbouring countries,” he said on the sidelines of a tree-planting ceremony with the Royal Thai Embassy here.

The embassy had organised a seminar on halal certification last week to share halal initiatives and promote future collaboration and investment between both countries.

The minister further said Thailand, through its Chulalongkorn University, has the facility and scientific knowledge to verify halal products.

“Thailand is known for its food production… it is the kitchen of the world and in terms of facilities at the university, it is one of the countries we use for second and third opinion together with Singapore,” he said.

Asked what kind of food production improvements Brunei can make, the minister said: “In terms of ingredients… the production of necessary ingredients to make the halal industry effective such as raw materials, food additives, food emulsifiers and halal gelatin”.

Thai Ambassador to Brunei Chirdchu Raktabutr said they chose to collaborate with the sultanate due to the detailed halal certification standards.

“We started with Brunei in terms of learning the halal certification because of the detailed rules and regulations. We need to understand it as it can be a good lesson and example for us,” he said.

The ambassador added that Thailand has its own standards set by the Islamic Council of Thailand and that mutual recognition can be achieved by learning both countries’ rules.

“From the seminar, I was made to understand that standards of certification (in Brunei) are slightly different from Thailand and we may make adjustments so that we can have joint recognition. This is to ensure products from both countries can be exchanged and serve both markets,” he said.

Based on initial studies, he went on to say that the Brunei market welcomes Thai halal products and the Thai market would also welcome the sultanate’s halal products.

“For Brunei, we export commodities such as rice, sugar and pepper as well as processed and canned foods… mostly food products,” he continued.