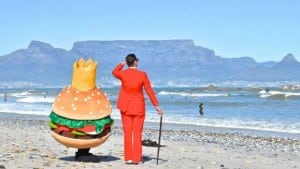 Less than a year after it opened it first restaurant in South Africa, Burger King anticipates skyrocketing growth and said it is cutting import costs with plans to build a meat pattie factory in the Western Cape, iAfrica reports.

But Burger King isn’t just thinking about selling more burgers in Southern Africa. The home of the Whopper plans to export halal patties from a  state-of-the-art meat plant in Elsies River — the only one in Africa capable of producing patties approved by Burger King and the second plant in the world to produce halal patties, according to Hassen Adams with Burger King South Africa.

Preparing to celebrate its first anniversary May 9 in South Africa, Burger King has already
blown away growth expectations, and importing ingredients has become impractical, iAfrica reports.

In February, Burger King announced it will build 25 more restaurants per year in Southern Africa. The number of restaurants is set to skyrocket and demand doesn’t seem about to drop anytime soon, Adams said. The company needs to be ready to handle far more customers in the future.

Burger King partnered with Excellent Meats to build a plant in Elsies River.

This opens up opportunities for exports to large Middle East markets, Africa and the
world at large, Adams said.

“We can now aggressively roll out stores all over Southern Africa,” Adams said. “Quite frankly, if our rand is so weak, why shouldn’t we take the advantage of exporting rather than importing?”

Production at the factory will begin within the next two-to-three weeks, Adams said.