considering not only further expansion in the Niagara Region, but also New York state and parts of the United States.

Mohamad Fakih, president of CEO of Paramount Fine Foods, said the rapid expansion is part of a game plan to have as many as 32 locations in his company’s portfolio in the coming months. Paramount currently has 19 restaurants, called Halal, with immediate plans to open another eight locations. Among those coming soon are one by Brock University and another in the Pen Centre shopping mall, both of which are in St. Catharines.

Halal this summer opened in Fallsview Casino & Resort in Niagara Falls, Ont. And negotiations are underway to possibly open along Queen Street in the Niagara-on-the-Lake. 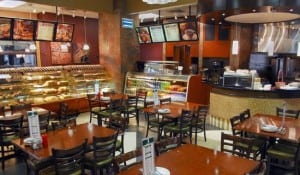 While Fakih would love to open a series of Halal restaurants in the New York City metropolitan area, he has not discounted or ruled out bringing one of the eateries to the Buffalo area.

“If we did Buffalo, it might be a bit further down the road,” Fakih said. “I do need to do some more research on Buffalo before we’d commit to anything.”

Fakih said opening a second Niagara Falls, Ont., site might be the in cards, but because of his company’s strong presence in Southern Ontario, he doubts Paramount would bring a Halal to Niagara Falls, N.Y.

“I think we have that market covered from this side,” he said. “Opening in Niagara Falls at the casino has been a very good move for us.”

Founded eight years ago, Paramount Fine Foods, through its Halal branded restaurants, uses the farm-to-table model for its vast menu offerings. Halal offers appetizers, salads, sandwiches and full dinners, all with a Lebanese flare. The chain reported revenues of more than $32 million (Canadian) last year thanks to such items as wood oven-baked pitas, charcoal barbecued Halal meats and chicken and beef shawarma.