The United Arab Emirates (UAE) poultry sector continues to grow modestly, despite facing serious challenges of which disease, and notably avian influenza, is the greatest problem.

Domestic poultry meat production in the UAE is expected to have reached 45,000 metric tonnes (MT) in 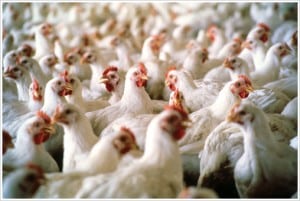 2015, an increase of 5% over the previous year. Looking forward to 2016 production is expected to reach 46,000 MT. In general local production covers about 15% of the  country’s total market demand and the remaining 85% is imported.

The poultry production sector in the UAE continues to face serious challenges from avian influenza. Old disease strains have mutated to new strains, particularly low pathogenic avian influenza, which complicates the situation for the producers. Migratory birds and wild animals also contribute to the movement of diseases to farms. As a result, mortality is reported to be as high as 25% on some farms, but in general it is estimated at about 12%.

High feed prices pose an added challenge to local poultry producers which has forced some of the smaller producers to close down their operations. In the absence of subsidies from the federal government, poultry producers face fierce competition from their counterparts in the Emirate of Abu Dhabi which provides 25% subsidy to its poultry farmers for select feed purchases. The movement of Abu Dhabi produced feed to other UAE emirates is not permitted and considered illegal.

Poultry production in the UAE is on a 4-6 week cycle and the use of growth hormones is prohibited. On average, the ages of the birds slaughtered are between 28 to 32 days. The average bird weight gain rate is reported at 40 g/day. Live chicken is slaughtered at 1.3 kg weight that dresses out at 1 kg. Major poultry operations in the country are fully integrated, including on-farm slaughtering facilities.

According to UAE law, poultry stunning is not allowed, so all locally produced chicken are Halal slaughtered, with hand slaughtering being the most common slaughtering practice. As a result, the movement of the birds during slaughtering complicates the slaughtering process, with producers ending up having a large number of birds with broken wings, legs and other damages which has resulted in the downgrading of 15% of the production.

The Steam Scalding Method has been introduced in the UAE and is reported to have helped greatly in reducing cross contamination and bacterial count, compared to the old method of using boiling water.

Poultry preferences of the consumer

The poultry consumption preference in the UAE is whole birds, leg quarters, boneless whole chicken, chicken breast, drumsticks, wings and other offal. Brazilian chicken is popular in the UAE as it is perceived as a quality product, competitively priced, and has low water content. Locally produced chicken is subject to strict supervision and inspection by the UAE government, to ensure that they receive highest food safety treatment and that they are fit for human consumption.

The consumption of boneless chicken is gradually gaining ground but their high price, particularly boneless chicken breasts, prevents them from achieving a bigger market share. Leg quarters have proven to  be very popular among food service and catering companies.

Considering the popularity amongst consumers, Brazil is the leading supplier of poultry to the UAE, with 68% of market share, followed by the United States, and France. The majority of re-exported poultry products are destined to Oman, Kuwait and Qatar. Industry sources suggest that exports of fresh poultry meat from Saudi Arabia and Oman to the UAE causes marketing challenges for local producers since both countries receive support from their governments.

Poultry imports in 2014 reached 357,000 MT, showing  a slight decrease from 2013 imports that totalled 361,000 MT. This is attributed mainly to lower re-export activities. Imports are expected to modestly increase in 2015 and 2016 by 1-2%, (365,000 MT and 370,000 MT, consecutively). This forecast is based on favouring factors, including improved economy and the aggressive development plan set by the UAE Government for the coming years.