Food Science and Technology has become one of the major disciplines in the universities around the globe. Questions 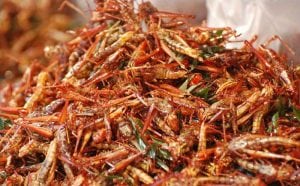 remained relevant through the centuries, on what to eat and what not to eat? The matter mounts to great concern when referring to the arthropods. Are they Halal to consume, particularly in the context of E 120, the natural red colouring known as cochineal produced from some scaled insects? Insects are also being introduced now as a source of protein in food. The outcome of this issue comprises of different narratives regarding the opinions of various Schools of thought.

ARTHRO indicates jointed while PODA implies legs. Any animal that has more than four jointed legs is a member of this family. It is a huge phylum which includes eleven classes and every class has its own subclasses. Furthermore, it is divided in to two major forms, land and marine. They are basically invertebrate living organisms, such as insects, spiders, scorpions etc. Some of them, like mosquito and grasshopper enjoy a rich history with mankind. Together with human beings they can be found anywhere.