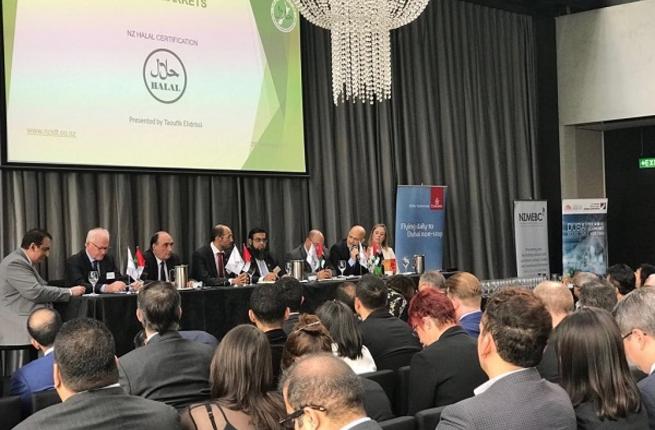 With a low population and a food-export-driven economy, New Zealand is viewed as a major market and potential partner in channelling trade through Dubai.  The red meat industry is one of New Zealand’s major export earners bringing in more than AED 15 billion (6 billion New Zealand Dollars) annually. This accounts for 15% of New Zealand’s total export revenue, and 27% of New Zealand’s primary sector export revenue. In addition, New Zealand exports over three billion dirhams (NZD1.2 billion) worth of skins and hides from sheep and cattle, mainly to be used in the fashion industry.

New Zealand is also a major dairy exporter with the sector contributing more than AED 20 billion, or 3.5% to the country’s total GDP. As a water-bound nation the aquaculture industry plays an important role and seafood trade contributes nearly AED 4 billion to the economy.

The UAE Ambassador to New Zealand Saleh Al Suwaidi commented: “The UAE has a natural fit with New Zealand in terms of trade, particularly since the UAE has only one per cent arable land and imports a large quantity of red meat and dairy from New Zealand. Connecting with New Zealand allows the UAE strengthen its hub-to-hub strategy of linking producer and consumer countries via the emirates.”

The mission hosted an important forum in association with the New Zealand Middle East Business Council where the keynote speaker was the Honourable Todd McClay, the New Zealand Minister of Trade. Referring to the long and friendly relations between the UAE and New Zealand as well as the growing Islamic consumer market, the Minister emphasised the halal sector as a potential area to enhance bilateral trade.

Abdulla Al Awar, CEO of DIEDC, stated: “Today food and beverage accounts for a little over a third of the halal market and the real growth areas are in lifestyles and technology. New Zealand is ideally placed to allow for synergy in the growing areas of the halal market.”

Mohammed Ali Al Kamali, Deputy CEO of Dubai Exports, pointed out that the halal trade is set to grow further and mark a significant shift in the immediate future away from being a niche market segment to mainstream. “We are already seeing signs of this as non-Muslim consumers are purchasing halal products and services due to its natural and wholesome nature. In the financial services sector we have seen that a large proportion of the customers of Islamic banks are actually non-Muslim and this trends will continue into other business area.”