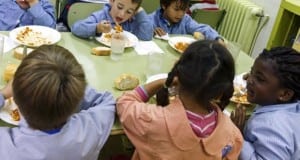 Paris: Muslim parents have reacted angrily in a French town after the mayor announced it was ‘pork or nothing’ for school lunches, under the principles of the secular republic which dictates that religion should have no place in state institutions – including schools.

The change came after the catering company that provides meals to the 180 students in the small town of Sargé-lès-Le-Mans in southern France reported difficulties providing alternate meals for the 15 Muslim children on pork-based meal days.

Declaring the local school free of religious influence, what in France is known as “laicïté”, or the “principle of Republican neutrality”, the mayor told parents it would from thereon be “pork or nothing”, TheLocal.fr reports.

The decision has upset Muslim parents in the town, who expect alternate meals for their children.

One mother, who’s son Tariq told reporters “I need meat, it’s important” said: “Telling a small child that ‘you will eat less today because there’s pork on the menu’ is difficult to comprehend. You feel it is discrimination.

After banning the full-face covering burqa in public in 2010, the expense on Halal meals by the French taxpayer has become a significant matter of public discourse, with a number of politicians giving their opinions on the matter.

She told French radio: “We will accept no religious requirements in the school lunch menus… There is no reason for religion to enter into the public sphere.”

This year a court in Lyon overturned a ruling that prisons had to serve Halal meals to inmates, claiming that failing to do so harmed a Muslim’s right to practice his religion in prison. The court found because there is a vegetarian alternative, an additional Halal meal was unnecessary.

Halal is big business in France, which has the largest Muslim population in Western Europe.

Breitbart London reported in October on a new start-up business created by a twosome of French-Algerian entrepreneurs which could test any food or drink for contents deemed to be Haram in Islam.

The portable laboratory could detect, they claim pork, alcohol, and human flesh, all of which are forbidden.

They hoped to develop another test which could even detect if the animal had been slaughtered ritually in accordance with Islamic law by detecting the levels of oxygen in blood.