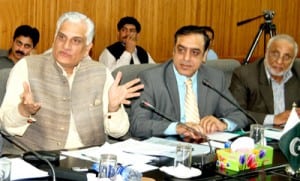 PESHAWAR: Federal Minister for Science and Technology Zahid Hamid said Monday that government had planned to set up Pakistan Halal Authority (PHA) with an objective to promote Halal business keeping in view of its increasing demand in the country and overseas.

Addressing a function of Khyber Pakhtunkhwa Chamber of Commerce and Industry here as chief guest and later talking to reporters, the Minister said Pakistan Halal Authority was being established in the wake of growing demands of the consumers for halal products besides boosting its share in the country’s exports.

The Minister said halal industry was rapidly growing in the world as its trade volume had touched approximately more than $ 2trillian in food and non-food items, adding the Authority would give our halal products an important marketing feature.

He said the Ministry of Science and Technology was adopting drastic measures to establish strong linkages among research institutes and academic institutions by involving private sectors in with a view to re-orient research and development towards market requirements and enhance its contribution to national socio-economic development besides raising the life standard of masses.

He said the Government is committed to promote Science and Technology (S&T) activities in country for socio-economic development as it is one of the main parts of the Pakistan Muslim League-Nawaz (PML-N) manifesto.

The Minister said that 15 organizations were working under the Ministry of Science and Technology with different jobs descriptions and role focusing for welfare of masses besides assisting different stakeholders in creating value-added jobs, research services and foster entrepreneurial spirit.

He said we were reaching out to industries and urged the businessmen and traders to come forward with solid workable suggestions what kind of research they needed for promotion of their products and boosting up of businesses.

The Minister said the organizations working under his ministry have been directed to prepare such products with consultation of stakeholders that have markets value for sustainable and robust economy.

Zahid Hamid said that his ministry had also initiated work on development projects for undertaking research and promoting biotechnology and others important technologies for welfare of the masses.

He said the Govt. was working on short, medium and long term strategy to prepare a solid plan by evolving consensus for sustainable development of science and technology. For this purpose, he said, working group of eminent experts has been constituted to make these plans comprehensive and growth oriented.

He said a modern technology park of international standard would also be set up in first phase in Islamabad and later would be replicated to all major cities of the country.

The Minister said the Govt was striving hard to provide level playing fields and enabling environment to traders, businessman and exporters in the country, adding for sustainable economic development, improvement of law and order was very imperative.

To promote trade, business and investment, the Minister said the Government has launched scores of energy projects in the country to cater the growing demands of consumers and industries besides agriculture sectors. For this purpose, he said work on the Diamir and Dasu dams is being started to give boost to existing industries in addition to starting new ones. On this occasion, the Minister highlighted various achievements of the Government in last six months.

The Minister said strict action would be taken against elements and companies found guilty for selling sub standard products in markets as it was the matter of human life and FIRs would be registered against them.

The Minister said a copy of Pakistan Protection Bill has been delivered to leaders of all political parties to take their inputs and their positive recommendations would be welcomed.

Earlier, President of KPCCI, Zahid Shinwari appraised the minister about different problems faced by the KP traders and business community. The Minister assured full support in this regard.

Later, KPCCI President presented souvenir to the Federal Minister for Science and Technology.