Jakarta – Halal certification for export products targets to boost added value and competitiveness at the global level, so that exporters can gain a broader understanding of the labeling process, according to Vice President Ma’ruf Amin.

“Halal certification for export products is expected to be interpreted by exporters as increasing the added value of their products, boosting competitiveness that leads to an increase in the export value of Indonesian halal products, and of course, it will make a positive contribution to Indonesia’s trade balance,” Amin stated at the Vice Presidential Palace, Jakarta, on Saturday.

To facilitate halal certification of export products, the vice president remarked that an integrated service center will be formed in an industrial area, so that halal labeling can run quickly.

“Hence, in future, they will be able to avail other services and forms of convenience, including halal certification. Thus, they will encounter no difficulties in managing it,” he explained.

Meanwhile, Coordinating Minister for Economic Affairs Airlangga Hartarto stated that a halal cluster will be formed in each industrial area to ensure halal-worthiness of the products, including the provision of halal certification.

“The existence of a halal cluster at one location is expected to make the halal certification easier and export-oriented. Hence, if it comes from a halal area, it is expected to increase sales,” Hartarto noted.

The halal cluster, also referred to as the halal industrial area (KIH), is currently open to industries in the fields of food and beverage, clothing, as well as medicine and cosmetics. However, the halal cluster did not rule out the possibility of expanding to other industrial sectors, the minister stated.

Vice President Wants Indonesia to be Largest Halal Producer in 2024 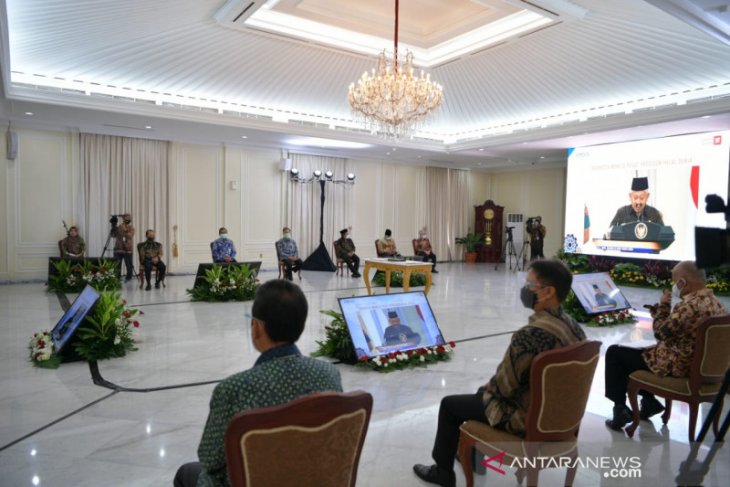 “The goal is to become the largest halal producer in the world by 2024. We are sure. Why? Because we have potential. Our domestic consumers must be big, it remains just how we become halal producers as the global hub,” Ma’ruf Amin said at a press conference after a web seminar on ‘Indonesia to the Center for World Halal Producers’ at the Vice Presidential Palace in Jakarta on Saturday.

As a country with the largest Muslim population in the world, the Vice President continued, Indonesia is a very decisive market in the world trade in halal products. However, so far, Indonesia has only played a limited role as a halal label provider for products made by other countries.

“More than 50 of the world’s halal certificate institutions have received endorsements from Indonesia. So, Indonesia is indeed a stapler, a craftsman to legalize halal products in various countries in the world,” Ma’ruf observed.

Therefore, the Vice President urged all stakeholders in the industrial world to take advantage of the potential of Indonesia’s halal market by increasing the export of halal products, particularly from the food and beverage industry.

Referring to the 2019 Global Islamic Economic Report, Ma’ruf said currently, the largest halal producer in the world is Brazil, whose exports are valued at US$5.5 billion, and Australia, with exports worth US$2.4 billion.

“We must be able to exploit the potential of the world’s halal market by increasing our exports, which currently only account for 3.8 percent of the total global halal market,” he noted.

Optimism over Indonesia’s chances of emerging as the largest halal producer in the world is also strengthened by the potential for increased consumption of halal products globally, which has continued to rise every year. Global demand for halal products in 2018 stood at US$2.2 trillion and is projected to touch US$3.2 trillion by 2024.

“With an estimated Muslim population that will reach 2.2 billion people in 2030, the global halal industry market economy will continue to increase rapidly. Of course, this is a huge potential that Indonesia must take advantage of by meeting global needs through export of halal products from Indonesia,” the Vice President said. (INE)