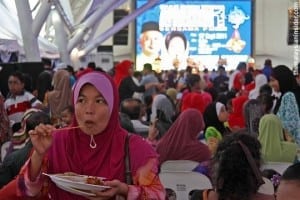 LONDON, May 29 — By 2020, 14 per cent of all international trips will be undertaken by Muslims who will outpace the global average when it comes to travel growth.

And given that 67 per cent of respondents in a survey that polled close to 1,000 Muslims said that the availability of halal foods was the most important consideration when booking their holiday, tour operators and tourism offices may do well to ramp up Muslim-friendly services, suggest the authors of the report.

According to DinarStandard, which specialises in emerging Muslim markets, the travel industry would do well to respond to Muslim travel needs given that by 2020, growth will have reached nearly five percent compared to the global figure of 3.8 per cent.

After halal food and cooking, the second most important factor for Muslim travellers was price, followed by a ‘Muslim-friendly’ atmosphere.

That could mean everything from prayer rooms to special services for the holy month of Ramadan and Eid al-Fitr.

The survey also showed that the preferred destinations among Muslim travellers are Malaysia, Turkey and the United Arab Emirates.