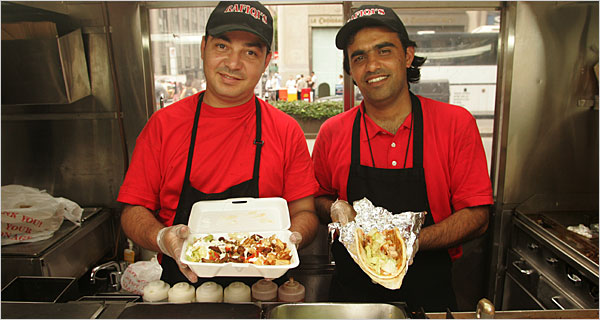 THE detail springs out at you from the
laminated articles that practically sheath his pushcart on the corner
of 45th Street and Avenue of the Americas: Mohammed Rahman, owner of
Kwik Meal and maker of a widely touted lamb-and-rice platter, once
worked as a sous-chef at the celebrated Russian Tea Room.

A native of Bangladesh whose
pristine toque reaches nearly to the ceiling of his cramped stall, Mr.
Rahman quit the restaurant business in 2000 after he noticed a pushcart
near the World Trade Center selling platters of halal food. Intrigued,
he ordered a container of chicken and rice. A few greasy bites later,
he had concluded that he could elevate the plebeian dish to
unprecedented heights of refinement.

“I’m a chef,” Mr. Rahman
recalled thinking at the time. “I can serve better food for people from
the office. The suit-and-tie people — they will come.”

Although
the city doesn’t collect statistics that distinguish between different
types of street food, halal vendors generally agree that their ranks
have swelled in the last five to eight years, prompting the obvious
question: How did the halal platter become the city’s new hot dog?

“The people usually go for chicken and rice because it’s good for hunger,” he added wistfully.

Mohamed
Abouelenein, an Egyptian who used to sell hot dogs, said, “Hot dog is
not a meal.” That’s one reason he switched to gyro and chicken in 1992,
becoming, he claims, the first peddler in New York to sell halal meat
from a cart.

“We figured out that most of the cabdrivers are Egyptian, Pakistani,” he said. “They suffered too much from no halal.”

On
some corners of Manhattan, halal carts outnumber hot-dog vendors by as
much as three to one. Mr. Abouelenein’s cart, named 53rd and 6th, after
the Midtown corner on which it sits, stays open from 7 p.m. to 4 a.m.,
feeding throngs of clubbers, foodies and cabbies. Its success has been
such that Mr. Abouelenein recently opened a new cart across the street,
supplanting — yes — a hot-dog stand.

The term halal may be
applied to any food prepared in accordance with the laws of the Koran,
although in New York the term has taken on special connotations: oily
chunks of chicken or gyro meat, yellowish rice, some scraps of lettuce,
hot sauce and, of course, the mysterious substance known as white sauce.

The most obvious explanation for its popularity is that the city is home to many more Muslim immigrants than in the past.

Arthur Schwartz, a New York food historian who runs the Web site foodmaven.com,
also suggests that a particular kind of customer has been instrumental
to the success of halal carts. “You can always tell who the new
immigrant group is by the cabdrivers,” Mr. Schwartz said. “Most of the
cabdrivers are now Bangladeshi, and the car service drivers are
Egyptian. And they are good customers for the carts.”

Sidewalk
wisdom holds that Muslims took over the street-cart business in the
1990s from Greeks, who had themselves inherited it from Italians and
Germans. Census data broadly supports this chronology. In an analysis
of data from 1990, the Queens College
sociology department found that 306 first-generation German and Italian
New Yorkers identified themselves as members of an occupational
category that included the job “street vendor”; by 2005, that figure
had dropped to zero. During that period, the number of Greeks in the
field rose to 200 from 120, while the number of Egyptians, Bangladeshis
and Afghans surged to 563 from 69.

Tony Dragonas, a native of
Greece and a sidewalk chef on the corner of 62nd Street near Madison
Avenue, vividly remembers many of his compatriots selling their carts
to Muslim buyers in the 1990s. “A lot of people got old, a lot of
people died,” he said. Raising one leg of his denim shorts to reveal a
skein of varicose veins, he added: “It’s hard work. My kids — they
don’t want to do this. They want to get educated.”

The son of a
hot-dog vendor, Mr. Dragonas has succeeded by continually reinventing
himself, supplementing staples like souvlaki and Italian sausages with
black angus steak and prosciutto-and-mozzarella sandwiches. Some halal
vendors have gone even further in adapting their cooking to the New
York palate, which has itself grown more sophisticated as recent
immigrants from places like Mexico and Thailand have redrawn the
restaurant landscape. Halal vendors sell varieties of white sauce so
far removed from any traditional food that no term less ambiguous than
“white sauce” would accurately describe them.

X-Press Power
Lunch, a chain with carts in Manhattan and Brooklyn, is one of many
companies that cater to the city’s less adventurous types with a
white-sauce base of mayonnaise. At the other end of the spectrum is Mr.
Rahman, whose quest for the sophisticated “suit and tie” market has
culminated in the creation of what many consider Manhattan’s white
sauce par excellence, a mélange of yogurt, sour cream, cottage cheese
and cucumber.

ALONG with culinary innovation, creative approaches
to marketing may explain the popularity of halal food among non-Muslim
customers. Asim Rafiqi, a 33-year-old refugee from Afghanistan, studied
computer science for two years at St. John’s University
in Queens before going into the family business, Rafiqi’s, in 1996.
Since then, the pushcart chain that he owns with four of his brothers
has stretched across Midtown and beyond, staking out no fewer than 11
spots with its signature red-and-black umbrellas.

Last winter,
he and his brothers designed several new carts; their structures call
for cooks and customers to stand facing one another. This should prove
especially advantageous for Mr. Rafiqi, a gregarious man with a
gleaming smile. “You’re talking to the customer, you’re with the
customer,” he said.

When it comes to innovation, few vendors have
proved the equal of Mr. Abouelenein, the owner of 53rd and 6th. His
employees wear uniforms of yellow — “We Are Different,” the T-shirts
proclaim — and the business has a Web site, 53rdand6th.com, where devotees are invited to submit works of cart-inspired art.

Nine
months ago, after a scuffle among customers spiraled into a stabbing.
Mr. Abouelenein responded with yet another innovation, one that few
hot-dog vendors have ever contemplated. He hired bouncers.