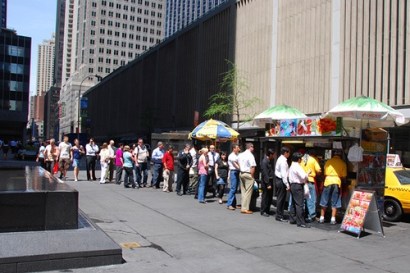 In the battle of the street-cart food vendors, whether kosher or halal, Mexican or Greek, beef always seems to be on the menu.

Newbies
on the streatery scene are saying that when they try to set up camp on
a busy corner they are often threatened by a group of veteran vendors
they call the “Halal Mafia,” according to the New York Post.

“They had their friends park a truck in my location because they were trying to much me out,” Clive Dennis, who manages the Little Ochi Hot Spot Jamaican-food cart, told the Post. “It’s like a mob thing — these halal guys think they’re the only ones who should be selling food on the street.”

After battling with them for months, Dennis finally got them to leave him and his cart alone.

“You have to stand firm with these guys,” he said.”

Olivia Cardosa,
meanwhile said she’s been losing the fight. When she set up her Mexican
truck on West 43rd Street  between Sixth and Seventh Avenues, she was
ambushed by a competitor who worked at a Greek food cart.

“She
said we couldn’t put our cart here,” said Cardosa. “Then she jumped on
our cart’s hitch trying to prevent us from putting it on the sidewalk.”

One passerby caught the whole incident on video, which was posted on MidtownLunch.com.

Cardosa
said when she arrived at her spot last Monday, three giant planters had
been cemented into the sidewalk where she would normally set up. The
building’s landlord called it vandalism. Cardosa said it was “the halal
guys.”

Erez Ella, who just set up his kosher-food truck on West 46th Street between Sixth and Seventh avenues, told the Post he has been threatened since the beginning.

“They told me they were going to bring 10 carts and block my spot,” he told the paper.

The next day his parking garage told him they didn’t want him there and that she should sell his cart to them.

Two days later his truck was dented all over.

The Halal Mafia had struck again.