The IFDC is one of the world’s leading modest fashion and design councils. 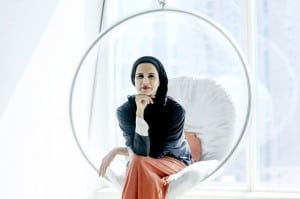 guidelines, which is receiving more attention, not only from Muslims, but also those aspiring to dress up within modest perimeters.

She said, today’s fashion encompassing Muslims, does not only mean wearing the abaya – the robe-like dress worn by Middle-eastern women -, but also other options such as the maxi dress, loose trousers, kaftans and high-waisted skirts.

“There is a huge demand in the industry from women who want to dress modestly, while following the latest trends, and Muslims aspiring to obey conservative Islamic principles. This is what we are here for,” she told Bernama.

According to Alia, the IFDC has launched iFash at Esmod Dubai for students there to learn about the challenges, intricacies and delights of Islamic clothing.

“The three-month course is the first Islamic fashion design programme and we hope to produce students to develop traditional middle eastern clothing,” she said.

Esmod is the United Arab Emirates branch of the French fashion school.

She said the council is now in talks with other schools on introducing a similar programme.

It was reported that the Muslim consumer expenditure in the clothing/ fashion sector will increase to US$322 billion by 2018 from an estimated US$224 billion in 2012.

Today, not just Muslim designers are waking up to demand for Muslim fashion attire. Big designers are also trying their luck on promoting their modest collections and the names include DKNY, Tommy Hilfiger and Mango.

The IFDC was established last year in New York and currently operates in Italy, South Africa, France, and Dubai.