KUALA LUMPUR: The establishment of the International Halal Authority Board (IHAB) confirmed the position of Malaysia 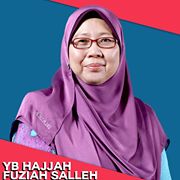 as a global halal leader through the recognition of the authorities and halal certification bodies abroad.

Deputy Minister in the Prime Minister’s Department (Religious Affairs) Fuziah Salleh said the body was part of the initiative of the Malaysian Islamic Development Department (Jakim) to safeguard the interests of Muslims in halal certifications of halal food products and services.

“As of Dec 3, 2019, Jakim has recognised 78 halal certification bodies from the countries concerned and the recognitions are given based on the compliance and implementation of the halal standard which adheres to Malaysian characteristics and models,” she said.

She was answering to the question of Awang Hashim (PAS-Pendang) who asked about the plans of the government in increasing Jakim’s role in halal certification, other than the issue of Buy Muslim First (BMF) during the oral answering session at Dewan Rakyat yesterday.

Fuziah said the recognitions indirectly became a mechanism of co-ordination at international level and these halal certification bodies must accept Malaysian halal standards.

She also announced that Malaysia had been appointed as IHAB chairman and secretary general for the 2019-2021 term during the IHAB general meeting on April 1.

Touching about BMF, she said the government, through religious agencies, had agreed to help promote halal products sought by Muslim entrepreneurs including through social media.

Fuziah said this was decided in a religious agency post-cabinet meeting recently.

“The government safeguards the interests of all parties and groups in this country, over the Buy Muslim First (BMF) campaign which is mistaken for a movement to boycott the products of other communities.

The government today accepts it with emphasis given to the concept of halal toiyyiban (allowed and permissible for consumption with relation to Syariah law as long as they are safe and not harmful) .

“The focus is given to halal certification which covers all aspects including ingredients, the process of preparation, the purity of equipment, cleanliness of the premises and the handling that prioritises compliance with shariah in addition to the safety, quality and integrity assurance aspects of a product or service,” she said.

While responding to questions raised by Jalaluddin Alias (BN-Jelebu) about the steps taken by the government in supervising of halal products on the market, Fuziah said periodic monitoring was always carried out by Jakim to ensure there was no abuse of the halal logo.

She said a halal directory was also established on the portal www.halal.gov.my or through the ‘Smart Halal’ and ‘Verify Halal’ applications to allow users to check the halal status of a product on the market. — Bernama