Please note there are two articles post here with regard to the announcement that came out regarding to the Halal logos used nationally: 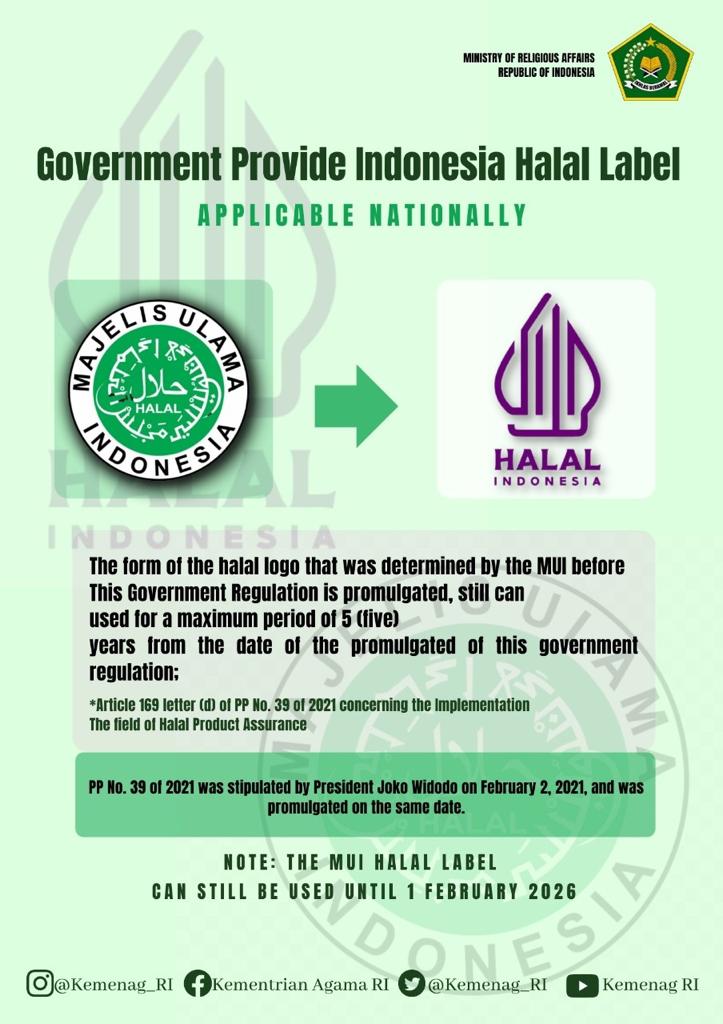 A minister said that the current logo from the Indonesian Ulema Council, or MUI, will eventually be declared void by the state-appointed regulatory body.

President Joko “Jokowi” Widodo has been working on a new halal regime in a country that has the world’s biggest Muslim population without upending trade and hampering investment since he took office in 2014.

“The halal certification label from the MUI will be declared void in the foreseeable future,” Religious Affairs Minister Yaqut Cholil Qoumas wrote on his Instagram account.

“Halal certification, as the law says, is organized by the government, not a community organization.”

The introduction of the new logo is probably the most significant step in the long and complicated transition as customers and producers will soon notice a change in the country’s halal regime.

The Halal Product Assurance Organizing Agency (BPJPH), an organization under the Religious Affairs Ministry tasked with taking over the MUI in identifying and certifying halal products, actually launched the new logo last month but it didn’t get public attention until the minister went to social media.

BPJPH Chairman Muhammad Aqil Irham said the new logo came into force on March 1 and gradually the MUI mark will no longer be recognized.

The Jokowi administration passed the Law on Halal Product Assurance on October 17, 2014, to provide the legal basis for a new halal regime fully controlled by the government.

But it wasn’t until he won a second term in 2019 that the government began implementing a 5-year phase-in period for the mandatory certification of food, beverages, and animal slaughter process.

Last year, the government launched another 5-year phase-in period for the mandatory certification of drugs, cosmetics, and worn and utilized products.

Yaqut said earlier there is a wide range of products to be halal certified that it takes five years for the full implementation of every stage.

“A phased implementation of mandatory halal certification is therefore inevitable.”

Prior to the new regime, halal certification and labeling were conducted solely by the MUI, sometimes causing overlapping authorities between the council and the government’s Drug and Food Supervisory Agency (BPOM).

The BPJPH has been overseeing the entire halal certification system since 2019 but it still relies on the MUI for the appointment of halal auditors and the Halal Examination Agency (LPH).

A key difference from the previous regime is that the government is now authorized to evaluate and sanction halal examiners for any non-compliance.

Recent halal quality product regulations are complementary to the so-called omnibus law, which brings together around 80 related laws aimed at bringing major structural reforms in businesses and creating more jobs for the people.

Jakarta (ANTARA) – The Religious Affairs Ministry allows business players to spend their product packaging stocks which still use the halal label stipulated by Indonesian Ulema Council (MUI) before adjusting to the application of Indonesian Halal Label.

Actually, the application of the new halal label has come into effect since March 1, 2022.

“Business actors whose products have received  halal certificates prior to the operation of the Halal Product Assurance Agency (BPJPH) and still have packaging stocks with halal labels stipulated by MUI are allowed to use up the stocks first,” Head of the ministry’s BPJPH Aqil Irham informed in a statement received here on Sunday.

However, once the stocks have been used up, the business players must immediately include the new Indonesian Halal Label stipulated by the agency on their product packaging in accordance with the regulations, he said.

The application of the new label has been regulated in the Decree of the BPJPH Head Number 40 of 2022 concerning the Stipulation of Halal Labels as an implementation of the mandate of Article 37 of Law Number 33 of 2014 on Halal Product Guarantee (JPH).

The government noted that prior to the effective date of the new label application, many business actors still produced their old product packaging with the MUI halal label.

Hence, Irham said that the decision allowing business players to use up the old packaging is a convenience from the government for business actors in the transitional period for halal certification program.

Earlier, halal certification was conducted voluntarily. However, currently, it has become a mandatory program.

“The government certainly understands the conditions faced by the business players. Hence, please create the new product packaging stock according to the provisions,” the BPJPH head appealed.

Previously, he said that President Joko Widodo targeted Indonesia to become the international hub for halal industry in 2024.