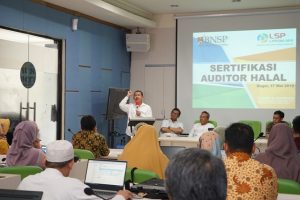 Bogor (17/5) – Professional Certification Institution (LSP) LPPOM MUI as the trustee holder of the Indonesian Council of Ulama (MUI) in implementing professional certification today, is increasingly ready to face the enactment of UU No. 33 of 2014 concerning Guaranteed Halal Products (UU JPH) with the addition of the scope of the certification scheme.

Now, LSP LPPOM MUI is starting to add the scope of the certification scheme, namely halal auditor certification. With this scope, LSP LPPOM MUI is the only institution that will certify halal auditors who will check product halal according to the mandate of the UU stated in Article 10 of the UU JPH. Witnessing was carried out by BNSP Commissioner, Muhammad Zubair, at the Global Halal Center Building, Bogor on Friday (17/5)

According to the head of the LSP LPPOM MUI, Ir. Nur Wahid, M.Sc., the halal auditor scheme become a milestone in the halal certification process in Indonesia where auditors will be certified and recognized by the state. In terms of competence, halal auditors that have been carried out internally by LPPOM MUI, are now carried out objectively by independent institutions under BNSP.

“This halal auditor certification is to ensure that auditors have competence in carrying out the inspection of halal products. The assessment of these checks must be accounted for in the world and the hereafter, so their competence must be ensured,” Zubair continued.

As is well known, LSP LPPOM MUI has been accredited by the Indonesian National Professional Certification Agency (BNSP) since 2017 with number: BNSP-LSP-664-ID for the scope of halal supervisors. Currently, LSP LPPOM MUI is in the process of accrediting the halal auditor’s scope. (YS)