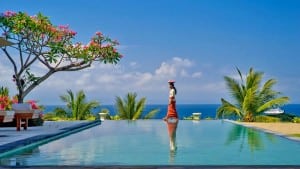 from the Middle East with a series of “shariah hotels” that serve only halal food and have gender-segregated swimming pools.

The group, which owns and operates 27 hotels, plans to build the new ones in Bandung, Bandarlampung, Yogyakarta and Bali, under the Grans Seriti Madani brand.

“If there is a five-star shariah hotel [in Bali], those Arabian kings would surely want to stay,” said Henry Husada, Kagum’s president director.

He added the company had obtained shariah certification from the National Shariah Council to build the hotels, which will serve no alcohol or pork products, and will have separate swimming pools and spas for men and women, in keeping with Islamic law.