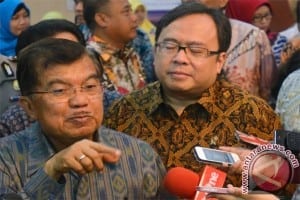 Jakarta (ANTARA News) – The Indonesian government is encouraging various sides to form a strong strategic alliance to develop sharia economy, which is expected to contribute to the national economy.

“We hope Islamic, or sharia, economy can be popularized in a way that can be easily understood by all people,” Vice President M. Jusuf Kalla said after opening the third congress of the Islamic Economists Association at the Finance Ministry here on Thursday.

When questioned whether the government intended to offer other special incentives to develop sharia economy, he affirmed that he would study them.

Indonesia has been chosen to host the World Islamic Economic Forum (WIEF) to be held in May next year, Finance Minister Bambang Brodjonegoro stated.

“We will host the WIEF in Jakarta in May 2016. The event will coincide with the annual meeting of the Islamic Development Bank,” Brodjonegoro noted after accompanying President Joko Widodo in a meeting with Chief of the WIEF Foundation Tun Musa Hitam at the Presidential Office here on April 21.

Indonesia hosted the forum once in 2009.

The forum is strategic because it will bring together businesspeople from all over the world, including those from Islamic countries who have surplus funds to invest, the minister explained.

“We will try to take advantage of (the excess amounts of funds) by hosting the WIEF in Jakarta,” he remarked.