One Christmas Eve, Mr Fazal Bahardeen found himself wandering the world as he sat at his computer at home. He 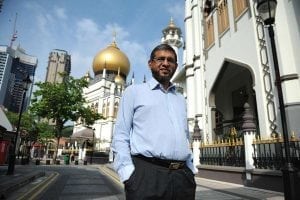 was browsing travel websites that brimmed with enticing lists of where to go the following year. Inspired, he started writing his Top 10 list for 2011, but with a focus on the uncharted halal-travel market.

Turkey, with its beach holidays, Australia’s Gold Coast, with its halal certified restaurants, and multicultural Singapore made his list of Muslim-friendly destinations.

That list of 10 havens has since been expanded greatly. A friend connected him with MasterCard, which partnered Mr Fazal’s CrescentRating halal-travel website and consultancy to devise the first annual index of 100 Muslim- friendly destinations in 2015 for a global audience.

His latest list, the Global Muslim Travel Index, will be unveiled on Wednesday in Jakarta. It will rank 130 destinations based on prayer spaces, halal dining, safe travel and other criteria that matter to Muslim travellers – a lucrative market which will reportedly be worth US$220 billion (S$307.5 billion) by 2020.

He still finds it incredible that MasterCard, a Fortune 100 company worth billions of dollars, partnered his small Singapore company, elevating his homespun index to a global brand that is routinely cited by tourism boards and governments, including Malaysian and Taiwanese leaders.

“What I created on Christmas Eve has grown into a global benchmark,” marvels the 53-year-old, who was born in Sri Lanka and became a Singapore citizen in 2002.

Similar to how he created his online Christmas list on his own, he was a one-man show when he ventured into the Muslim travel market almost a decade ago at age 45 to start a trio of halal-travel brands.

In his middle age, the newbie entrepreneur became a travel trailblazer, producing a string of digital and offline firsts – from rating hotels on how well they meet Muslim needs to an in-flight prayer app to a shark-cage diving tour near Cape Town in South Africa.

It all began when he was a high- flying telecommunications executive at Alcatel, which he worked for from 1988 to 2007 in its Beijing, Paris and Singapore offices, among other cities.

“I travelled a lot for my corporate job and more than half my time was spent in hotel rooms. I would struggle to find halal food. If I was having this problem, others would too,” he recounts. “I had this idea about rating hotels.”

He devised criteria along the spectrum of “must-have, good to have and nice to have” to rate hotels. Does the mini bar stock halal items, for instance? Does the hotel have night clubs, casinos or adult TV channels? Is there a list of nearby mosques?

, malls and other hospitality players.

And so, CrescentRating has become the world’s first independent rating and accreditation standard in Muslim travel, as International Enterprise Singapore has billed it.

Mr Kenneth Sim, 40, is a divisional director at the government agency which opened doors in the region for Mr Fazal. They first met in Doha around 2009, when he was posted to the Qatari capital. Mr Sim remembered Mr Fazal’s innovations a few years later in Singapore, when he learnt Japan was keen on attracting Muslim and South-east Asian travellers.

“I admire him for his passion and drive in creating the first-of-its- kind travel platform for global Muslim travellers. We all see in him a strong entrepreneurial spirit. He left his cushy MNC job for a niche segment which had not been tested,” Mr Sim says.

“He wants to do something good for fellow Muslims – make it easier for them to see the world – and he is going all out,” he adds of the man he regards as a “thought leader” in Muslim travel.

Mr Fazal has zealously spun off diverse platforms. He set up HalalTrip.com, which is like a TripAdvisor for Muslims, with city guides, reviews, dining passes and more.

There is also Muslim Travel Warehouse, which offers 65 itineraries and also creates bespoke trips, such as a Northern Lights jaunt in Iceland. His clients include big Arabian families, young European Muslims rediscovering their heritage and adventurous Southeast Asians.

His three private companies have four shareholders – himself, a Sri Lankan businessman, a Bahrainian businessman in Dubai and an Indian entrepreneur.

He is on the road about seven times a month for business, for instance, presenting insights at Muslim travel fairs and forums.

Last year, in Singapore, he hosted the inaugural “Halal In Travel” conference at ITB Asia – another breakthrough.

This was organised by Messe Berlin, which runs the world’s biggest travel trade show, ITB.

And so, he keeps chasing the firsts and the successes. But his journey has been fraught with sacrifices and low moments, especially over concerns about cash.

Staying out of his comfort zone

Mr Fazal ran into naysayers when he started the lonely pursuit to establish CrescentRating, but he persevered. “Quite a few people thought I was crazy.”

He says: “Financially, we have gone through tough times. Every entrepreneur goes through it. Entrepreneurs need to know they have to go through tough situations emotionally and financially. I could dispose of certain things and my founding shareholder was supportive. I used all my savings.”

Every entrepreneur goes through low moments. That’s why you have to be convinced that it’s worthwhile and will change the world, or you will give up.

He used to own two cars. Now, he drives a Toyota Altis with a few months remaining on its certificate of entitlement.

What helped was that his family members do not live lavishly and are very much behind him.

His wife Merita, 51, also born in Sri Lanka, is a housewife who holds the fort at home while he travels. They met as engineering students on scholarship at the Beijing University of Posts and Telecommunications. Married since 1986, they have three daughters and a son – all in their 20s.

His children would help to write, edit and proofread his online content. His son, for instance, penned a series on environmentally friendly travel.

Mr Fazal has traversed the unknown to start his companies, but then, he has stepped out of his comfort zone all his life.

When he was 20, he left for China to pursue his engineering degree. He then started work at Alcatel, got married and raised his children there.

“I spent my adult years in Beijing – from age 20 to 32. My second daughter was born one month before the Tiananmen Square protests of 1989. I spoke fluent Mandarin and felt like Beijing was my second home,” he says.

His Beijing accent was so pure that, in the 1980s, when he booked hotel rooms over the telephone for his work trips in the provinces, the Chinese did not realise he was a foreigner until he arrived at their doorstep. He still speaks decent Mandarin, but it is “ma ma hu hu”, he quips, meaning “so-so”.

At 31, when he was already a family man, he studied for his master’s degree in the same Beijing university.

“How did I do my exams in Chinese?” he wonders sometimes.

But then, he is able to stay cool under pressure.

Mr Oliver Foo, 52, a former colleague who was a managing director at Alcatel-Lucent Singapore, says: “Fazal’s calm demeanour is not put on. What you see is what you get. He’s the coolest cat under pressure. I don’t recall seeing him lose his cool.”

Mr Fazal was “tough but always fair” and focuses on untangling core problems. “He wasn’t interested in quick fixes or shoddy short-term solutions. It was always about how to solve key problems and provide value to customers. I firmly believe that the start-ups best positioned to succeed are those that solve an onthe-ground problem,” Mr Foo adds.

The two men worked together from 2002 to 2007 on big infrastructure projects for telecoms service providers across the region.

Mr Fazal’s coolness and ease in new situations were also evident when he was in school.

“Most of the things I tried, I was somehow able to do well in a short while. I never played hockey before I was 16 and I played for the school team that year. Then, I was chosen for the under-19 all-schools team,” he says.

He took part in a national karate tournament and came in second in his category in Sri Lanka. He and his brother also fared well in carom competitions at the national level in Colombo, where his housewife mother, who left school around the age of 12, made sure her three children were fully educated while his father struggled to make a living as a clerk.

Mr Fazal’s four children went through the International Baccalaureate route at the United World College without having tuition.

He calls them third-culture children who are “confidently independent”. He notes: “It’s not all about grades. It’s about a rounded education and whether you are concerned about the community and environment and are able to express thoughts independently.”

For someone whose business revolves around travel, he says he had a late start. He enjoyed his first taste of independent travel at the age of 18, after completing his A levels. “With four other long-haired kids, I travelled to India. It was a two- week budget trip on trains and boats.”

His dream destination is Peru. “I have travelled for the past 35 years and been to about 40 countries, but have yet to see Latin America.”

In personal travel, as in business, he thinks in figures, although he will reveal only that revenue has jumped. “Last year was our best year. We saw a five-fold increase from the year before.”

Imagining the future, he says: “My dream is to own a US$1-billion company in five years.”

But the essence will not change. “I don’t want to just take something that exists and put a Muslim- friendly sticker on it. I want to be an innovator.”

KUALA LUMPUR, May 3 — Malaysia is the most popular destination with global Muslim travellers for the third year, according to MasterCard’s Global Muslim Travel Index (GMTI) 2017.

Respondents ranked Malaysia ahead of the United Arab Emirates and Indonesia as the most visited destination in the Muslim travel market out of 130 major nations surveyed.

The report co-published with CresentRating, a leading authority in halal travel and tourism, stated that the countries were ranked based on how well they cater to Muslim travellers.

Singapore topped the list for non-Organisation of Islamic Cooperation (OIC) destinations that are Muslim friendly, followed by Thailand and the United Kingdom.

Among the criteria considered when ranking nations were ease of access, communication and outreach, environment and services.

The GMTI also found that Asia was the most attractive continent for Muslim tourists followed by Africa, Oceania and Europe.