The fund will be raised in stages over the next three years by Azka Capital, a private equity advisory firm focused on halal industry initiatives. 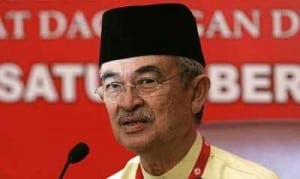 Abdullah (picture), who is the Chairman of its Advisory Board, said the time was now right to create strong opportunities to enable greater participation in the halal sector.

“The demand for halal products and services is expected to increase with the growth of the Muslim population and increasing awareness of the halal standard.

Now, is the right time, to put our money where our mouth is, so to speak,” said Abdullah in his keynote address during the World Halal Week Conference 2013 here today.

The Conference is being held in conjunction with the four-day World Halal Week 2013 from today.

Abdullah said the prospects for the halal market could be seen from the perspective of the global Muslim population, which is expected to grow to three billion, while at the same time being inadequately served.

“In addition to raising funds for investment, Azka Capital will provide solutions for halal industry players, including advisory services in navigating access to the halal market,” he added.

“It will not be open to the public and is for high net worth individuals and institutions, as we are looking at a first close (first tranche) of US$100 million (for minimum capital).

“We have significant interest from the United Arab Emirates (Dubai), Saudi Arabia and Kuwait,” he added.

He also said that the fund is expected to be launched in the first half of 2013.

Azka Capital is the latest initiative to be jointly developed by the World Halal Forum. The company will be advised by practitioners from the halal food sector, alongside shariah advisory services, from Amanie Advisors and Dubai-based Dar Al Shariah. — Bernama