KUALA LUMPUR/JAKARTA — Japan may have a minuscule Muslim population, but the country still represents the way forward for Malaysia’s Faisal Ahmad Fadzil and his line of halal-certified bath products and massage oils.

“If you’re successful in Japan,” Faisal said, “you can go anywhere.”

Malaysian exporters of Shariah-compliant products aim to go anywhere and everywhere, capitalizing on a global Islamic economy projected to be worth over $3 trillion by 2023. But with such an enormous opportunity comes formidable competition.

Indonesia, home of the world’s largest Muslim population, is looking to mount a serious challenge.

The Arabic term “halal,” which means “permissible,” covers everything that conforms to Islamic law as written in the Quran. The best-known rules prohibit pork and alcohol, but the scripture can be applied to all sorts of products and services. Despite efforts to create a universal standard, for now various countries use their own certification methods.

As things stand, Malaysia has the edge over its Southeast Asian neighbor in the halal business. It exported 43.3 billion ringgit ($10.5 billion) worth of certified products in 2017, up 32% from four years earlier in local-currency terms. Food accounted for nearly half the exports, alongside cosmetics, chemicals and other goods. Indonesia, meanwhile, shipped $7.6 billion. 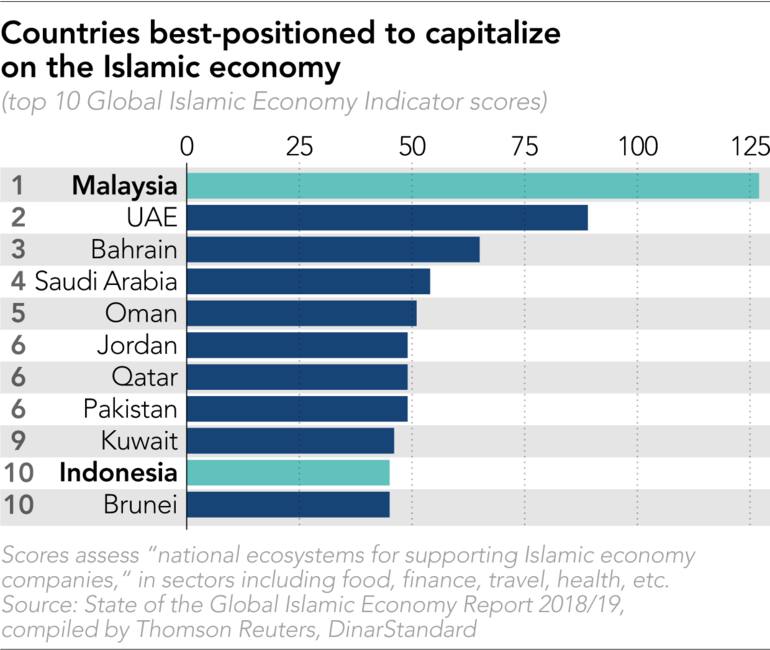 Malaysia ranks first among countries best-positioned to seize opportunities in the Islamic economy, according to a 2018-2019 report by Thomson Reuters and DinarStandard that makes the $3 trillion projection. Nowadays, this economy includes not only predominantly Muslim countries but also other markets like Japan where there is demand for goods conforming to Islam’s restrictions, be it from travelers or immigrants.

Malaysia, which has long made halal goods and Islamic finance pillars of its economic development, hopes to widen its lead by launching a marketing blitz in Japan. The idea is to help small and midsize enterprises like Faisal’s make inroads, and the immediate goal is to make the most of the 2020 Tokyo Olympics.

Around 45,000 athletes and officials are expected to attend the games, and about 40% of them will need halal products, Malaysia’s Entrepreneur Development Ministry estimates. That is to say nothing of the fans who will come to cheer them on.

“The most needed thing for Muslims is to be able to easily access halal food,” said Hind Hitomi Remon, director of the Japan Halal Association. 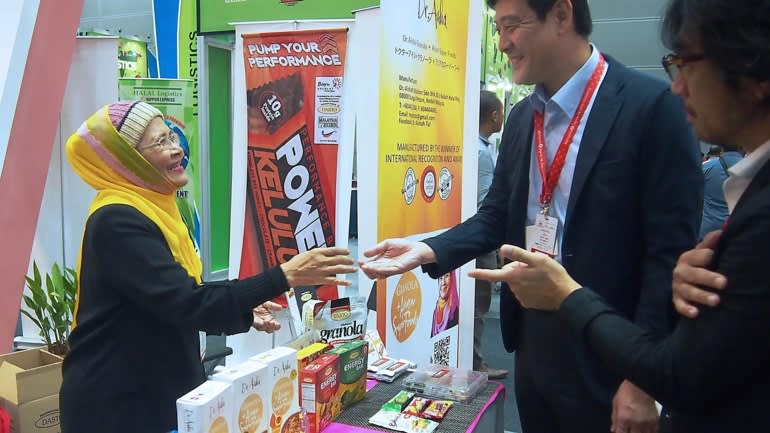 The inaugural Malaysia Halal Expo 2019, held by the country’s government in January, focused on promoting exports to Japan. (Photo by CK Tan)

More Southeast Asians are also visiting Japan for sightseeing. Arrivals from Indonesia soared by over 400% from 2007 to 2017, while the increase from Malaysia exceeded 300%, data from the Japan National Tourism Organization shows. And Remon stressed that company and school cafeterias need to adapt to halal as Japan brings in more workers from countries like Indonesia to offset its labor shortage.

Preparing for the Olympics, she said, “would be a good lead for the food industry to also get ready for canteen needs.”

Malaysian Entrepreneur Development Minister Redzuan Yusof, at a Jan. 24 launch event for the Japan marketing campaign, talked up his country’s halal standards as the “best in the world” but stressed this “won’t mean much if we do not get our products out into the global market.”

The country’s strict halal certification, handled by the Department of Islamic Development Malaysia, is indeed recognized worldwide — though not in Indonesia. Negotiations on this are stalled, but in the meantime, Indonesia is working to become a bigger halal force by expanding its own certification, strengthening its halal manufacturing base and boosting exports.

With nearly 90% of its more than 260 million people following Islam, Indonesia has always been one of the biggest halal markets. But its exports are dominated by commodities, making the economy susceptible to volatile resource prices. 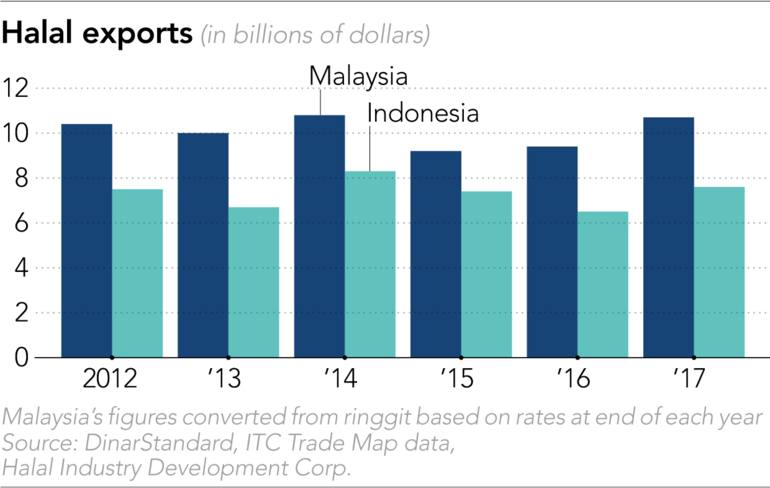 Given the growth of the global halal business, President Joko Widodo sees a chance to change that.

Widodo has made a point of reaching out to the Muslim world. Indonesia has stepped up trade missions and hopes to conclude deals with nine countries this year, five of them largely Muslim, including Iran and Turkey.

At home, the government is developing four halal-focused industrial clusters to attract manufacturers of compliant products, plus restaurants, malls and Islamic financial institutions — those that offer services in compliance with Islam’s prohibitions on interest and other rules. Indonesia has also designated about 10 provinces well-suited to Muslim travelers.

But the most important changes concern the scope of halal certification and the way it is administered.

Starting this October, Indonesia will make it mandatory to certify a host of goods and services as halal: food, beverages, drugs, cosmetics, chemicals and biological or genetically engineered products, along with other consumer goods that are worn or used by the public. Some in the business community have mixed feelings. “For food and beverage products, I strongly agree [with mandatory certification], but outside of that, it should be voluntary,” said Hariyadi Sukamdani, chairman of the Indonesian Employers Association. The move, he said, will mean “additional costs” for companies.

The certification cost is a negligible $140 to $320 depending on a company’s size, but there could be other costs associated with making production lines halal.

Jurisdiction over the process, meanwhile, is to shift to a government organ from the Indonesia Ulema Council, or MUI — the country’s top Muslim clerical body.

“It is appropriate for the issuance of halal certification to be carried out by government institutions, by collaborating with the MUI, to increase the trust of such certification both at home and abroad,” said Religion Minister Lukman Hakim Saifuddin.

A significant amount of money is at stake: The new system is expected to bring the government 22.5 trillion rupiah ($1.6 billion) in annual revenue, according to a Bloomberg report on Sunday.

The MUI will still have a “very large” role, the minister said. But having a government body overseeing halal certification could help Indonesia better compete with Malaysia and other rivals on the global stage.

Businesses run by Muslims and countries with Muslim-majority populations are not the only competitors. 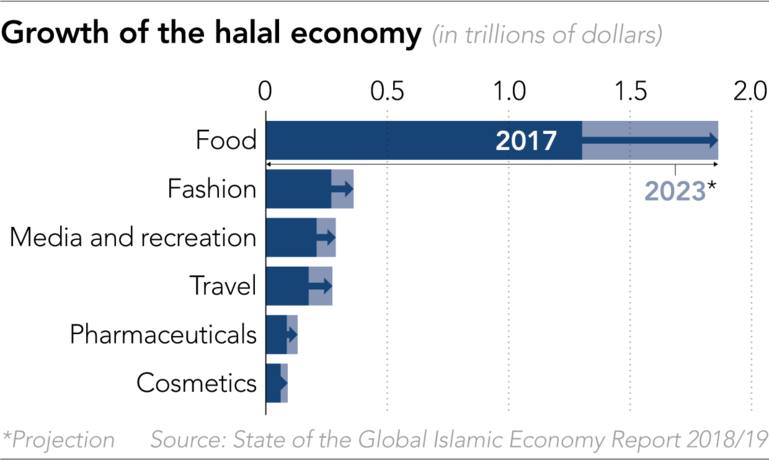 The Thomson Reuters report on the “State of the Global Islamic Economy” highlights Malaysia’s clout, but its sector-by-sector breakdown also shows just how international the halal economy has become.

Brazil ranks third in the food industry, by virtue of its status as not only the world’s top exporter of meat but also the leading purveyor of halal meat, despite its distance from any Muslim-majority country.

Singapore and China are competitive in modest fashion, ranking third and sixth in that category, respectively. Thailand ranks sixth on the list of Muslim-friendly travel destinations.

A Tokyo import business called Yatsumoto Tsusho offers a prime example of how companies outside the Muslim world can take advantage of the boom: helping halal exporters adapt to new markets.

With or without a halal stamp, exporting to Japan means overcoming stringent safety requirements and trade procedures. Plus, company President Yasuhiro Fukuchi said, even products targeted at Muslims “must also be made to please the Japanese taste buds.” Travelers at Bangkok’s Suvarnabhumi International Airport: Thailand has emerged as a major player in Muslim-friendly tourism. (Photo by Ken Kobayashi)

Fukuchi is working with a Malaysian granola maker called Dr. Aishah Solution. With his help, which includes advice on packaging and marketing, Dr. Aishah will start supplying sugar- and salt-free granola to high-end hotels in Kyoto and Osaka this spring.

In some cases, even non-Muslim consumers seek out halal products precisely because the standards are so strict. This is true of Malaysian cosmetics, exports of which soared 32% in 2017, to 2.9 billion ringgit.

The trend is one reason Faisal has high hopes of making it in Japan with his bath salts, soaps and massage oils. His company, Tanamera Tropical Spa, already has a Japanese distributor and exports to Germany, Hong Kong and Vietnam as well. But in 2019 he wants to open a store in Japan, aiming to boost his ratio of overseas revenue above 30%.

As borders fade and opportunities snowball, the Islamic economy report predicts a shift in the competitive balance. “Malaysia and the [United Arab Emirates] lead once again, but significant changes are expected in the leader board going forwards as more countries attach strategic economic importance to the Islamic economy.”

With the number of Muslims on the planet expected to hit 2.7 billion by 2050, according to Pew Research, there might just be enough business to go around.