Having been ranked the friendliest country for Muslim holidaymakers for the third year running, Malaysia has confirmed its position as a premier halal tourism destination. However, its position – and the revenue that comes with it – could be challenged by regional rivals seeking to cash in on the lucrative market. 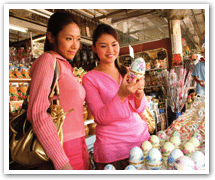 The tourism sector is already a major contributor to the Malaysian economy, directly generating $21.4bn in 2012, the equivalent of 7% GDP, according to the latest report on the global industry’s economic impact, issued by the World Travel & Tourism Council (WTTC). The council’s report for 2013, released at the end of February, said tourism provided direct employment to more than 800,000 Malaysians, some 6.5% of the active workforce.

However, when indirect factors – such as state spending on tourism-related infrastructure and support, the supply and purchase of goods and services, transport, information technology and utilities – are taken into consideration, tourism’s total contribution to the economy came to $48bn, or 15.6% of GDP, and accounted for 1.7m jobs, 13.6% of the total.

The WTTC has also forecast Malaysia will continue to build on its achievements, with total tourism revenues expected to reach $81.5bn by 2023 on the back of a sharp increase in arrival numbers over the coming decade, as the number of visitors is projected to rise from 27m in 2013 to 45m in 10 years.

According to Jamil Bidin, CEO of local firm Halal Industry Development Corporation (HDC), Malaysia has made itself into a leading destination for visitors from the Middle East by making its halal brand what he called, “a seal of guarantee for consumers”. “If you want to encourage Muslim tourists to come to your country, halal-certified products and services are required,” Bidin told reporters at a halal trade fair in Kuala Lumpur in early April.

The international halal tourism trade is estimated to be worth more than $125bn per year, some 12.3% of the global outbound tourism market. This figure is set to rise by an estimated 4.8% annually through to 2020 – well above the forecast 3.8% global average – as disposable incomes in many Asian and Middle Eastern countries increase. Malaysia has already positioned itself to take a significant slice of the existing and future trade, being ranked first for the past three years in an international survey for being halal tourism friendly.

The annual market assessment, based on a number of factors, including the availability of halal food, prayer facilities, and halal-friendly accommodation, was carried out by Singapore-based consultancy and research firm Crescentrating. According to Fazal Bahardeen, CEO of the firm, the survey was conducted from the point of view of the traveller, meaning that it measured the ease of access by Muslim tourists rather than locals to halal food and services, with Malaysia scoring well across the board.

Malaysia’s continued strong showing was largely due to the fact that authorities have been focusing on the market for a number of years, he said. “Malaysia remains the top destination for Muslim holidaymakers,” said Fazal. “It is still the best place to enjoy your holiday and at the same time be completely worry-free when it comes to finding halal food and prayer places almost everywhere.”

Malaysia also benefits from being within a single flight of much of the world’s 1.7bn Muslims, as it has direct links to the Middle East, the Indian subcontinent and Asia.

While Malaysia may head the Crescentrating rankings, it is likely to face increasing competition from regional rivals in the years to come. The survey found that Indonesia was lagging when it came to catering for halal tourism, though Jakarta has announced it will launch a multi-faceted programme in June that aims to better Indonesia’s tourism sector to perform in the sharia-compliant segment of the global market. Singapore and Thailand also have strong market potential and hope to begin competing with Malaysia.

Under the government’s Tourism Transformation Plan 2020, launched in 2010, Malaysia is aiming to attract 36m overseas visitors by the end of the decade, a target it seems to be well on track to achieving, having seen arrivals hit a record 25m in 2012, some 40% up on the 2005 total. Similar progress over the next seven years will put Kuala Lumpur’s goal well within reach and on the road to the 45m the WTTC has forecast for 2023.

The Ministry of Tourism estimates that almost one-quarter of inbound visitors come from Muslim countries, which makes the need to maintain the flow of new services and facilities for this market essential to further growth and development of the sector, as well as to ensure it stays ahead of regional and international rivals.