JOHOR BARU (THE STAR/ASIA NEWS NETWORK) – A director and a manager of a frozen food company in Senai, Johor, have been charged at the Sessions Court in connection with a meat syndicate scandal.The accused, company director Yong Chee Keong, 40, and manager Chong Kim Kuang, 48, 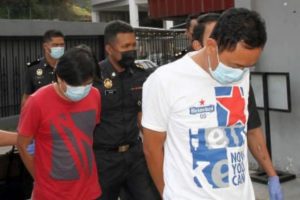 pleaded not guilty when the charges were read to them before judge Ahmad Fuad Othman.

They were accused of using fake halal logos on dozens of packages of meat not certified to be halal, an issue that has raised concern among Muslims in Malaysia.

Yong, together with another company director who is still at large, was slapped with seven charges.

According to the charge sheet, Yong and the other director allegedly committed the offences between Dec 1 and Dec 3 last year at the company located in Taman Perindustrian Desa Idaman in Senai.

Chong also faces seven charges under the same Act for similar offences at the same place and time.

They were accused of using fake halal logos on dozens of packages of meat not certified to be halal.

He also ordered the accused to surrender their passports and to report to the Kulai police station once every two weeks.

Last year, Malaysian authorities busted a syndicate that had been smuggling meat from Ukraine, Brazil, Argentina and China and repackaging it with fake halal logos.

A raid was carried out at a warehouse in Senai where 1,500 tonnes of frozen meat worth RM30 million were seized.

The cartel, believed to have been operating for a few years, had allegedly been using the warehouse as a location to make fake labels and stamps to be pasted on packages of meat not certified to be halal.