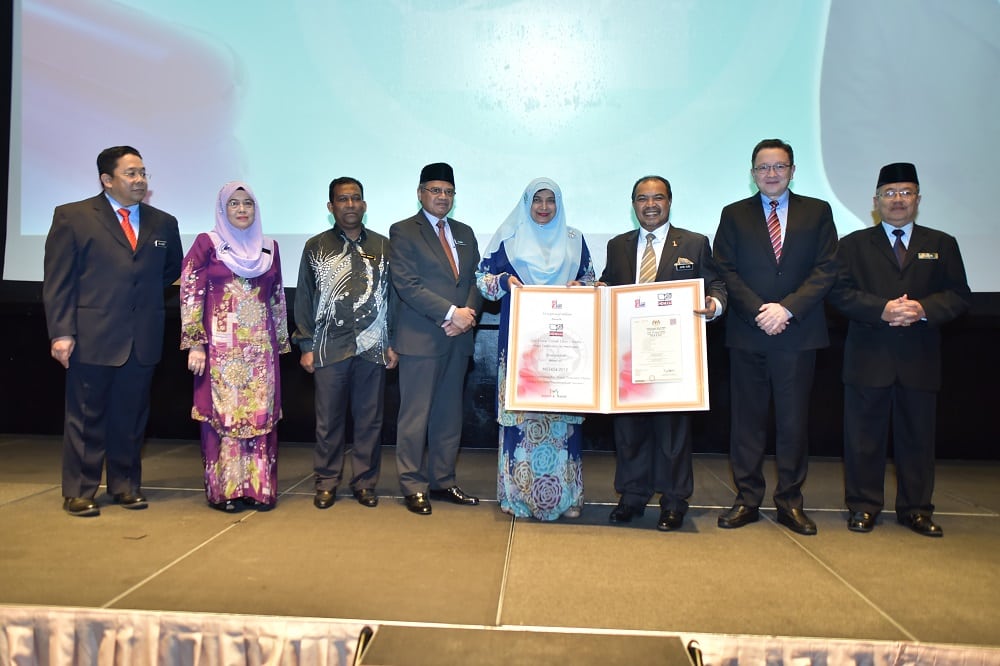 Jabatan Kemajuan Islam Malaysia (JAKIM) created yet another historic milestone in the Global Halal industry, by being the first Halal certifying body to certify controlled/prescriptive medicines (Ethical Products) based on the world’s first Halal pharmaceutical standard MS2424:2012 Halal Pharmaceuticals – General Guidelines. The Halal certificate for the prescriptive pharmaceutical products was presented to Chemical Company of Malaysia Berhad (CCM) during a special Award ceremony at Pullman Putrajaya.

The Halal pharmaceutical standard MS2424:2012 was developed by the Department of Standards Malaysia, Ministry of Science, Technology and Innovation (MOSTI) in collaboration with JAKIM’s Halal Hub Division, the National Pharmaceutical Regulatory Agency (NPRA), industry representatives and subject matter experts from both Shariah and science. Prior to the availability of this Halal Pharmaceutical standard, the Halal food standard MS1900 had been referred to as a stand-in guide by the pharmaceutical manufacturers. This was not ideal as the Halal Food Standard was not tailored to the complexities and peculiarities of the pharmaceutical industry which is highly regulated by the government, adopting a high professionalism approach. Upon the publication of the MS2424 and through many dialogues, seminars, and one-to-ones with industry leaders and experts, JAKIM’s Halal Hub Division has successfully developed a certification system based on this standard that can be used by not just pharmaceuticals companies in Malaysia and worldwide, but also by recognized Halal certifying bodies around the world.

The certificate was presented to CCM by YB Major General Dato’ Seri Jamil Khir bin Hj Baharom (B), Minister in the Prime Minister’s Department. This certification marked a new era for the entry of Halal Pharmaceuticals into the local and international marketplace, as a wider range of Halal pharmaceutical products manufactured by CCM which are duly certified by JAKIM would now be available to consumers, empowering them with more informed choices for medicinal products. 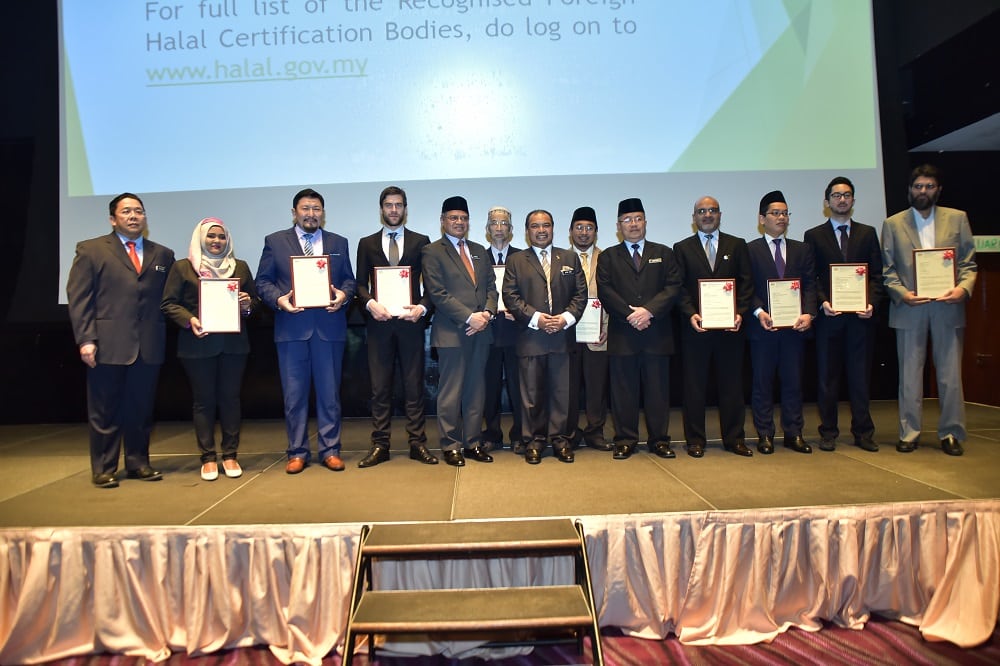 Malaysia enjoys worldwide acceptance and acknowledgment of the Halal Malaysia logo due to its high standards and promise of integrity within the concept of Halalan Toyyiban. With the global Halal Pharmaceutical prospect valued at USD75billion currently, and is estimated to reach USD132billion by 2021, Malaysia is poised to increase its presence and command leadership in this industry with this new milestone achieved by JAKIM.

Commending JAKIM and CCM for their efforts in creating history in Halal Pharmaceuticals, Minister in the Prime Minister’s Department, Dato’ Seri Jamil Khir said, “This landmark certification to CCM would give a greater impetus to Halal Pharmaceuticals both domestically and globally. We hope this will bring about greater participation from pharmaceutical manufacturers worldwide as well as mutually recognized Halal certifying bodies to do the same in order to ensure that prescriptive medicines, vitamins and health supplements are Halal and Shariah compliant thus offering a better choice to Muslims and Non–Muslims alike. Halal certified products are not only permissible to Muslims but also manifest the safe, effective, high quality and hygienic aspects.”

“Halal” standards should be at the crux of healthcare and pharmaceutical products. In other words, there should be a convergence of Shariah and Science – and Malaysia can and should be the driving force, considering the country’s implementation of the world’s first Halal Pharmaceutical standard – the MS2424, in 2012.

The Minister added, “We want global players to consider the country as the new regional hub to cater for the expanding Global Halal Market. Muslims need to equip themselves with more knowledge in the field of medicine and make informed decisions because Muslims are mandated to avoid choosing haram and doubtful ingredients if the choice is there. “Do not fall back on ignorance or “dharurat” as an excuse not to practice the tenets of Islam”.

Currently, Halal medicines are estimated to have contributed close to one-third of the total revenue from the global Halal market, posing an extremely attractive opportunity for Shariah compliant medicines. This is supported by the fact that demand outstrips supply of Halal medicines by a significant margin, creating potential for future economic value added in the industry.

For a long time, Halal pharmaceuticals were shrouded in ambiguity over certification and compliance factors. The MS 2424:2012 has served as a reference for the pharmaceutical industry. Malaysia is one of the most lucrative markets in the global Halal pharmaceutical landscape, in terms of production of Halal medicines, their consumption and most importantly the thought leadership in this highly knowledge-based, professional industry. The standardisation of the Halal pharmaceutical market will most definitely lead to increased confidence among consumers around the globe.

In her appreciation of JAKIM’s acknowledgement of CCM’s efforts and commitment towards Halal, CCM’s Chairman Dato’ Hajah Normala Binti Abdul Samad stated, “It is for this reason we celebrate this recognition which is an important milestone for CCM in becoming the leader in pushing forward the importance of Halal Pharmaceuticals in Malaysia as well as at the global level. The pharmaceutical industry is an important component of the healthcare sector in Malaysia and has a high growth potential, both in the domestic and export markets. This industry has been given recognition by the Government as a Strategic Industry which requires promotion.”

Dato’ Hajah Normala also added that it is CCM’s hope that Halal Pharmaceuticals would also pave the way to create opportunities for Bumiputeras within the pharmaceutical ecosystem, reflective of CCM’s support of the Government’s call to strengthen the competitiveness of Bumiputera in this niche industry, especially in “Thought Leadership”, stimulating the command of Malaysia’s Muslim scholars, scientists and subject matter experts in promoting the convergence of minds – Shariah and Science to strengthen Halal pharmaceuticals locally and internationally, contributing towards Knowledge Economy/K-Economy.

In Islam, non-Halal medicines are allowed to be consumed only if there no other alternatives, as the main tenet of Maqasid Shariah is the preservation of life and health. However, the Muslim population worldwide is growing more informed and discerning in their choices and are looking and demanding for pharmaceutical products that contain only Halal ingredients.

In awarding the certification to CCM, JAKIM urged more pharmaceutical companies to emulate CCM’s efforts to infuse Halal as part of its daily operations from the management to its operations, at every level. JAKIM also commended CCM’s Halal Assurance Management System which is testimony of CCM’s commitment and assurance to educate the public that Halal certified products do not only benefit Muslims by virtue of its confirmation of permissibility, but would also benefit everyone as it also attest that the products are safe for use, effective, of high quality and hygienic.

JAKIM also reiterated that Halal should be “Built-in and not Tested For” and that all Halal Malaysia certificate holders should commit to upholding the highest Halal standards at all times, not just for the purpose of assessment or renewal of the certificates. Although JAKIM’s Halal Hub Division performs surveillance audits throughout the validity period of the Halal certificates, the daily assurance has to come from the companies themselves, as exemplified by CCM.

CCM is a public listed company on the main market of Bursa Malaysia. Established in 1963, CCM plays a key role in the development of the pharmaceutical and chemical industries whilst actively championing and developing Halal initiatives in Malaysia.

With more than five decades of commitment to enhancing the quality of life for all Malaysians, CCM’s wide range of products and services to the healthcare and chemical sectors further affirm our mission to provide innovative science and technology based solutions to all our stakeholders.Issued by bzBee Consult Sdn Bhd on behalf of CCM Berhad