KUALA LUMPUR: A device invented by Malaysians to detect porcine DNA is set to make waves in the global 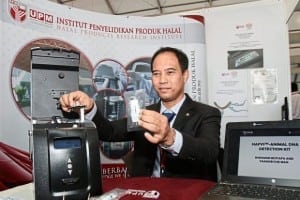 GeneStat, developed by a team from Universiti Putra Malaysia (UPM), makes use of the HaFYS Porcine DNA Detection Assay system to detect traces of porcine DNA in food samples.

The 8kg portable device eliminates the risk of sample contamination during transportation to a lab and also cuts short the analysis time from a few days to just under an hour.

“It was invented in 2011 and was commercialised here last year. But now we have exclusively licensed it to an American company, DxNA LLC, to be marketed globally,” said UPM halal research institute deputy director Prof Dr Shuhaimi Mustafa.

A major plus point for the device is that it is a closed system, which means that it does not require DNA extraction from the food samples.

“It does not even require a trained person to handle it. All you need is to insert the food sample into the prepared tube, and insert the tube into the device and close it.

“About an hour later, the results will appear on a screen attached to the front of the device,” he said.

The device is now being marketed in the Middle East and Europe.

Kaysha Kencana Sdn Bhd, which is the sole distributor of GeneStat for South-East Asia, is marketing the device at a competitive rate in the region.

“We are also working with manufacturers and pharmaceutical companies as well as Islamic agencies to promote GeneStat,” he said.