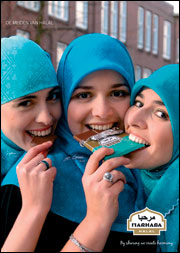 A
new range of delicious Halal Belgium chocolates, cake bars and sweets
will shortly be available in Harrods and 35 Waitrose stores around the
country. In keeping with the religion and culture, Cambridge based
Marhaba Halal Food has worked to fuse Islamic values with modern
tastes, to produce a range of stylish and high quality products that
are modern in look but authentic in taste and will appeal to modern
Muslims and non-Muslims alike. Marhaba Food’s slogan is ‘by sharing we
create harmony.’

This superb range includes mouth-watering 100g Belgian dark
chocolate and milk chocolate bars, and dark chocolate bars with tangy
orange. There is also an attractively packaged box of 20 heart shaped
milk chocolates with hazel nuts. Also in the collection are 8 pack and
individual Twinz cake bars consisting of four delicious flavours,
including Chocolate and Strawberry, Chocolate and Orange, Cherry and
Yoghurt, and Strawberry and Yoghurt. Added to the range are mint and
fruit chews and spearmint and peppermint gum, both sugar free.

Until recently, Muslim chocolate and sweet lovers often had to buy
vegetarian products, but not all of these are suitable for a Muslim
diet as many contain alcohol or emulsifiers and preservatives, derived
from animals that have not been prepared according to the Shari’ah,
Islamic Law.

All Marhaba products are produced by selecting and preparing the
finest 100% Halal ingredients – every ingredient can be traced back to
ensure that it is Halal and vegetarian. Working closely with
independent Halal auditors, Marhaba Food ensures that all stages of
production, storage and transportation are monitored to avoid any
possible cross contamination. Marhaba products have been Halal
inspected and certified and carry a quality mark that guarantees Halal
hygiene and traceability.

Demand for Halal products is on the increase amongst the 1.6 million
Muslims living in the UK. The population is currently estimated to have
a Halal market consumption of around £700 million. With the increasing
Muslim population, this is only likely to increase. According to
Mintel, UK Muslim spending power reached £20 billion during 2002.

The UK Halal market has increased by 30 per cent in the last year,
and the market has really started to take off. The Muslim community are
always looking for something new and want the very best quality
products. Chocolates and sweets are a popular gift for Ramadan, which
begins this year in the first week of September, the end of which will
be marked around the 3rd of October with the celebration of Eid Al Fitr.

Research commissioned by Ethnic Focus on behalf of World Food
Market, showed that 94% of Muslims would only consume Halal food and
Halal is an important part of their lives, while 76% would like to see
more Halal products on the market. 9 out of 10 Muslims said they would
be more likely to show brand loyalty if the packaging explicitly stated
it was Halal.

Many non-Muslims are also choosing to eat products prepared
according to Halal food standards, as Halal has come to signify
cleaner, healthier and safer foods.

Mahaba products have a blue design, which has been inspired by an
authentic Arabian mosaic. Not only are they utterly delectable and
tasty, they are also beautifully packaged and make a wonderful gift.
Halal chocolate and sweets have never tasted or looked so good!

To meet the growing demand for specialist foods, in June, Waitrose
launched their ethnic range, they will be adding Marhaba in time for
Ramadan from 23rd August, in 35 stores nationwide. Harrods will be
selling Marhaba in time for Ramadan. Marhaba are also currently talking
with distributors with a view to rolling out the products nationally in
supermarkets, co-ops and c-store chains.

The range is already selling very well in Holland and will also be
launched in France in time for Ramadan. Demand for high quality Halal
products is on the increase among the 15 million Muslims across Europe.
A chain of hypermarkets in Saudi Arabia, Dubai and Qatar has also shown
great interest in the range.

“Following a lot of research with Muslim consumers throughout
Europe,” says Shabana Pervez, UK Manager of Marhaba Halal Food, “we
discovered a real need for specific Halal products that up until now
had not been met. The needs of the Muslim consumers are changing and
they are also looking for products that they can share with
non-Muslims, but at the same time the products must meet their
religious needs. In Holland, where we launched late last year, we have
found that 25% of our consumers are non-Muslims. This is why we have
developed the slogan ‘by sharing we create harmony’.”