Some 18 years ago, a friend of mine asked me if I knew the hidden message in the advertisement on the billboard in front of us. I had no logical answer as I had never pondered over the subliminal messages found in advertisements. This friend of mine analysed and dissected the billboard for no less than 15 minutes. He explained the use of words, presentation, colour etc. and meticulously discussed the meaning of each little detail. I was very impressed by what I heard and I remembered every aspect of his lecture.

To this very day, whenever I see any advertisement, I scrutinise and analyse every aspect of it. This little hobby of mine has now become my habit and, after seeing an advertisement only a few times, I can distinguish whether the purpose of the advertisement is simply to advertise the product or whether it is driven by a company’s fear of a new competitor on the market.

Despite my position, schedule, and engagements, I am still a consumer who has to purchase and use groceries on a daily basis. Hence, as my needs change, I have to make a decision as to whether the product I currently use can fulfil my needs or whether I should search for another product. Thereafter, I must assess the two products and decide whether or not the previous one was the better and most effective of the two.

This challenge has taught me a great deal. From the time, I see the advertisement until I use and see the results of the product, I continuously evaluate and test it. I only make the product a part of my life once I have obtained proper and satisfactory results. The reason for writing the series on “How to Look at an Advertisement” is to teach companies what other customers, like myself, think of them, how they look at their products, what effect their advertisements have on them – whether good or bad – etc.

A Local Pakistani Chocolate vs. A Foreign Haraam Chocolate:

Some time ago, we received information that a certain famous chocolate brand manufactured in Malaysia supposedly contained ingredients derived from pork. This information, which was later disproved by Jakim, the Malaysian Halal certifier, ignited a fire. The Muslim consumers were very concerned when they heard this. One could clearly see the major impact that this leak of information from Malaysia had in Pakistan. It caused a significant decline in the sales of this product in Pakistan and the consumers went to town in their propaganda against it. There was a storm on social media and all and sundry considered it his/her responsibility to 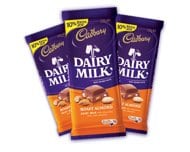 In short, this information led to a major decline in the demand for this chocolate. However, together with this, it created a gap in the market due to the fact that the most popular chocolates in our country are generally produced by multinational companies.

In order to fill this gap, a local company flooded the market with its latest chocolate. From a business perspective, this was the ideal opportunity to launch and market their product and, in so doing, fill the newly created void.

The company that was incorrectly accused of adding ingredients of a pork origin happened to be a multinational company. However, the employees were all Pakistanis. Initially, they did not take it seriously, but when the news spread and the movement gained momentum, they arranged for a local Halaal organisation to certify their product. At most, it was announced on Facebook and other forms of social media. Since time heals all wounds, as time passed, the information became stale and sales started picking up again.

Nonetheless, the local company had taken a significant share in the market which this multinational company did not want to relinquish. Hence, the first company devised a comeback strategy. There was an incredible atmosphere in Karachi. There were billboards no less than 60 feet tall, advertising this chocolate and the amazing thing was that the second company put up the very same size billboards either before or after those of the first company. In other words, both companies resorted to the very same marketing strategy for the very same product.

As a consumer, I could not appreciate it, because their policies and strategies were all wrong. My reasons for saying this are listed below. You decide for yourself:

The astonishing thing is that neither of the companies displayed a Halaal logo on any of their billboard-size advertisements, whereas the Halaal or Haraam status of the product was the root cause of the entire debacle. The marketing team was satisfied with merely displaying a tiny little Halaal logo on the back of the chocolate and thought that they had fulfilled their responsibility of announcing that their product is Halaal. The satisfaction of the customers is the objective, not the satisfaction of the marketing team!

In my opinion, the main problem is that sentiments of the Muslim public are not taken into consideration when teaching marketing strategies. The underlying reason for this is that almost no importance is accorded to matters of Halaal and Haraam when we teach marketing. This is the reason why we spend millions of Rupees on advertisements but pay no attention to having our product certified or announcing that it is certified. As for those who do have their product certified, they don’t like displaying the Halaal logo on the front of their product whereas it is a sign that adds value to it and appeases the customer.

Perhaps the customers in our industry have not yet been given due importance.