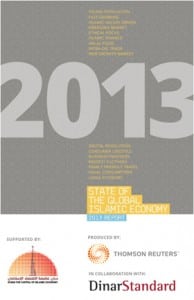 DinarStandard (DS), a growth strategy research and advisory firm specialising in the global Islamic economies, recently released the State of the Global Islamic Economy Report, in partnership with Thomson Reuters.

The report finds the market potential of the fast-growing global halal food and lifestyle sectors, worth $1.62 trillion in consumer expenditure in 2012 and expected to be valued at $2.47trn by 2018.

The report has charted a clear roadmap for companies within (or peripherally related to) the referenced industries, as well as countries at large, to distil and leverage the quantified opportunities that exist within each of these sectors, both individually and collectively.

The lack of convergence between the related Halal food and lifestyle sectors and Islamic finance sector has made Rushdi Siddiqui, senior partner at DS, to refer to the two segments as “twins separated at birth.”

Dubai is determined to establish itself as the capital of the global Islamic economy. Sheikh Ahmad bin Mohammed bin Rashid Al Maktoum, in his role as chairman of Noor Bank, said recently that: “Islamic finance is the fuel to propel our nation towards even greater accomplishments”.

According to DS analysis, while the broader food and agriculture segment within OIC countries has seen 340 completed investment transactions (between 2011 to 2013) with total disclosed value of transactions at $14.9 billion, only 17 completed transactions relating to halal food companies were reported worldwide, with the seven disclosed deal amounts adding to just $22 million.