When Irishwoman Easkey Britton climbed onto a surfboard on a beach in Iran, the whole of the local village turned out to watch.

“They were just so friendly and so curious – they hadn’t seen surfing before,” she said.

Easkey, 26, now stars in a documentary about becoming the first woman to surf in the Islamic country.

Initially, she and filmmaker Marion Poizeau were unsure of their reception in the country.

As they got on with their surfing in the sea close to Chabahar, southern Iran, last September, a police car pulled up and they grew more concerned.

But there was no need.

“The police were just checking we were okay. They were worried about the rocks on the beach and whether we knew about them.”

Easkey – named after a famous surf break off the west coast of Ireland – might have seawater flowing through her veins.

Her name comes from Iasc – the Irish for fish – and she first took to a surfboard at the age of four in Rossnowlagh.

The sea is her passion in every sense and last week, she submitted her PhD thesis on marine conservation at the University of Ulster, Northern Ireland.

“I have been fortunate, I was born into surfing. There is no other experience like it for me,” she explained.

Now, a documentary film about how she became the first woman to surf in Iran will be broadcast on French television on 30 September. 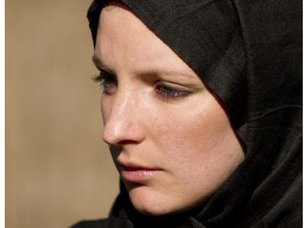 Easkey travelled to southern Iran last September with Marion, who is French. It was a journey that transformed the women’s view of the country.

“We headed off to this Islamic Republic as two women looking for waves,” she said.

It seemed a little bizarre and they had a few preconceptions that were quickly squashed.

“The moment we landed, people were incredibly welcoming and Iran has an amazing heritage. Yes, as women we had to have our heads covered and it was incredibly hot.”

The other issue was one of respect for the local culture and rules.

“Nigella Lawson and her burka started a trend,” she joked, referring to the media coverage of the UK celebrity chef pictured on Australia’s Bondi beach in a black head-to-toe outfit that resembled a burka.

“I bought a lycra hijab which had not been designed for the surf. But it covered me,” explained Easkey.

“The water was so hot … but it was certainly no place for bikinis and board surfing.”

Her brilliant surfing – she is five times Irish surf champion – filled the locals with wonder.

Now Easkey wants to bring her love of surfing across the world, to cultures where women do not normally get the opportunity to enjoy the sport

She found a website which promotes surfing for women in countries where they would have little opportunity to do so.

It encourages women to make waves of change in their communities.

“There is a small surf culture in Bangladesh and India. Women and girls are learning to surf in the most extreme of conditions – such as in the Gaza Strip,” said Easkey.

Now she would love to teach others in the Middle East.

“I especially want to teach in places where people do not normally have the opportunity to learn,” she said.

Her surfing has taken her around the world – she was the first Irish person to surf the frightening Teahupoo waves in Tahiti and the first woman to ride the giant wave Aileens at the Cliffs of Moher in County Clare.

“There is nothing like it for me,” she said.

“It is a challenge and it is escapism. It is about being in nature and being far from the world – just you and the waves. It is truly lovely.”