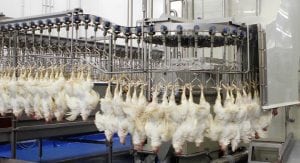 In the developed world, many Muslims define Halal meat based on the method of slaughter, that is, whether animals were stunned or not prior to slaughter. The meaning of Halal however goes beyond this definition; the Halal-Tayyib concept is a holistic approach which covers the welfare of animals and poultry from the point of birth through on-farm husbandry, transport and slaughter.

It is against this background that some Muslims have raised doubts about the compatibility of factory farming with the Halal-Tayyib concept due to the appalling conditions in which birds are raised and transported from the farm to abattoirs. The focus of this article is however not on farming and transportation of poultry, but on slaughter. The article highlights the shortfalls of the two main methods of slaughtering Halal poultry, that is, slaughter with and without stunning.

First, let’s consider the slaughter of poultry without stunning under commercial conditions. Does this method provide 100% certainty that all birds will be alive when their necks are cut? And is it a welfare friendly method of slaughter? There is a simple answer for both questions, and it is No!

The method is not welfare friendly because during slaughter of poultry without stunning, birds are restrained by inversion and shackling which have been shown by researchers to be painful and causes significant physical damage. In fact research has shown that shackling of live birds resulted in 44% of freshly broken bones. This is surely a concern for Halal-Tayyib, isn’t it?

Further, the inversion of birds prior to slaughter can lead to the death of birds before their necks are cut, this is because birds anatomically lack a diaphragm which means the viscera (internal organs) can compress the thoracic cavity (when they are inverted during shackling) which can create breathing difficulties and subsequently can result in death of birds. So when birds are slaughtered without stunning, there is no absolute certainty that all of them would be alive at the time of slaughter (if they are inverted and shackled).

Now let’s turn our attention to the stunning of poultry prior to slaughter. This method of slaughter poses the same welfare and Halal compatibility issues as slaughter without stunning, in that birds are inverted and shackled prior to slaughter which can cause significant animal welfare compromises and can lead to the death of birds before slaughter as explained above.

Additional, when birds are stunned using water bath stunning, current passes from the head through the body to the feet. The passage of current through the head will stun the birds and induce unconsciousness, however, the subsequent passage of current through the body can affect cardiac rhythm and can cause the death of some birds. Therefore, the slaughter of poultry with or without stunning does not provide 100% certainty that all birds will be alive at the time of slaughter.

It is the view of the author that, to improve the welfare of animals (and prevent death before neck-cutting) during Halal slaughter, Halal certification bodies should consider banning the inversion and shackling of live birds. The Prophet of Islam, Mohammed (PBUH) was a known animal welfare advocate who reprimanded any of his followers who abused animals under their care, so one will therefore argue that he would not have permitted the inversion and shackling of birds which have been shown to compromise the welfare of birds.

Halal certification bodies who approve stunning should also be encouraged to adopt the electrical head-only stunning systems that does not induce cardiac arrest and cause death prior to slaughter.

Gas stunning provides better protection for bird welfare because it eliminates inversion and shackling, however, it does result in the death of almost all birds so it is not generally accepted as a suitable Halal stunning method.

Awal Fuseini is a researcher with an interest in humane slaughter of animals. He has published numerous peer-reviewed papers in a number of high impact scientific journals, his research focuses on improving the welfare of animals during restraint and slaughter for Halal meat production.