Over the past decade, the term halal has evolved to take on a new meaning. What used to be mostly about food and Islamic financing is now seen as a way of life, sending ripple effects across supply chains and industries. The trend is now stimulating billions of dollars in halal market expansion.

“The preparation of food is the raison d’être, the original reason, why we have the halal industry in the first place,” said Afifi al-Akiti, D.Phil., a fellow at the Oxford Centre for Islamic Studies, at a recent halal conference in Malaysia. “[But] as a scholar, I think the philosophy of halal should go beyond the preparation of food. … Halal should also be about an ethical and wholesome way of doing business.”

In supply chains, al-Akiti gives the example of a halal chicken producer, where halal should permeate the end-to-end chain from farm to table, including raising chickens ethically and sustainably, paying employees fair wages, and charging consumers a fair price.

In 2017, the global halal economy amounted to $2.1 trillion as the world’s roughly 1.8 billion Muslims warm up to halal lifestyle products, according to the State of the Global Islamic Economy Report 2018/19 by Thomson Reuters and DinarStandard. Halal food and beverage products make up the largest category, with consumers worldwide spending $1.3 trillion, followed by halal clothing at $270 billion, halal media and entertainment at $209 billion, halal travel at $177 billion, halal pharmaceuticals at $87 billion, and halal cosmetics at $61 billion.

The report projects the global halal economy to hit $3 trillion in 2023.

Some companies, with the support of their governments, are eager to cash in on the growing halal market. Korean companies will be filling retail space with halal Korean eateries, karaoke rooms, and cosmetics stores in a four-storey Koreatown in a Malaysian shopping mall. Japanese company Curetex Corp. is partnering with a Malaysian food service provider to set up a halal central kitchen serving thousands of athletes and delegates due to arrive at Tokyo’s 2020 Olympic Games.

Halal media and entertainment are also gaining traction. The Halal Foodie on Discovery Networks’ Travel and Living Channel is a popular television show featuring a Muslim host traveling around Asia in search of the best halal food for Muslim travellers. SalamWeb, a sharia-compliant mobile browser, is gaining popularity as an alternative for Muslims who want to avoid gambling or pornographic content, preferring content aligned with Islamic values. Its users flag inappropriate webpages, and the browser has functions to remind Muslims of prayer times and kiblah, the direction Muslims face when praying.

In halal fashion, mainstream retailers like Macy’s in the US and global brand H&M have launched their own “modest” fashion lines, while fashion magazines are featuring more Muslim models on their covers.

“From a commercial point of view, the cost of making a halal product is not prohibitive,” said Jeremy Nasrulhaq, FCMA, CGMA, a former finance director at Unilever Malaysia. “A management accountant will have to do the analysis, determine the cost impact on margins, and make recommendations to the company — is it worthwhile to meet the demand for halal products?”

Some consumers in the West, however, have certain misgivings about halal products. Some have called it “halal phobia”.

Scandinavia’s largest dairy producer, Arla Foods, has faced pushback in some markets when it tried putting halal labels on its products. “It sometimes carries a negative connotation to the non-Muslim consumers,” said Henrik Björkqvist, an Arla Foods senior general manager for Malaysia and Singapore markets.

“The non-Muslims perceive it as negative because for some of them, halal represents inhumane slaughter and that halal is something very Muslim,” he said, referring to the Islamic practice of slaughtering animals with a sharp blade to the neck. Animal rights activists condemn the religious practice. They say stunning an animal before slaughter is the more humane method, though Muslims disagree. (See the sidebar “What Makes Something Halal?” below)

Headquartered in Denmark, Arla Foods also operates in the Middle East. Confident that this experience would give it an advantage in Malaysia, a Muslim-majority country, it was caught off-guard by the stringent Malaysian halal authority when it entered the South-East Asia market in 2015.

“In Malaysia you need to break down the microbiology … the entire product,” Björkqvist said.

Yet companies are optimistic that those challenges can be overcome. Governments are increasingly calling for mutual recognition among national halal certification bodies. There are some positive results in that regard. Malaysia, widely recognised as a pioneer in halal certification, has recognised 78 foreign certification bodies from 45 countries, according to a list published by the Department of Islamic Development Malaysia. Blockchain is also being deployed to solve inconsistencies in the certification process and increase transparency.

But amidst this halal “rush” is a huge caveat. Growth projections for the halal market assume that Muslims will want to buy halal products other than food. But will they?

Riyaz Kadir, a 27-year-old from Chennai, India, who plans to start his own halal dairy company, said most of his friends think halal is mostly about a method of slaughtering animals and not eating pork or drinking alcohol. Although he agrees with the interpretation that halal is a lifestyle that includes nonfood products, he said his Muslim countrymen may not see such a need. “Lack of awareness, that’s the main issue,” he said.

Thought leaders in the halal industry are encouraging Muslims to demand halal-certified products in general, not just food, to build a halal ecosystem that involves the whole supply chain, from business financing to the end product and service. (See the sidebar “Expert’s View: Start With Muslim Consumers’ Needs,” below.)

“It’s really a groundswell, companies can only react to the demands of the consumers,” said Leonard Ariff Abdul Shatar, group managing director of Duopharma Biotech, a Malaysia pharmaceutical company, speaking on a panel at the halal conference. “It’s up to everyone in this room to demand having food [and] cosmetics that actually meet halal standards.”

“If you expect it to be done the other way, I think you’ve got your equation wrong,” he said.

The Muslim population will reach almost a third of the world’s population by 2050, according to a projection by US-based Pew Research Center, and to Abdul Shatar, there’s no mistake that halal products and services will become commonplace.

“[Halal] is coming to a stage where it’s becoming mainstream,” he said. 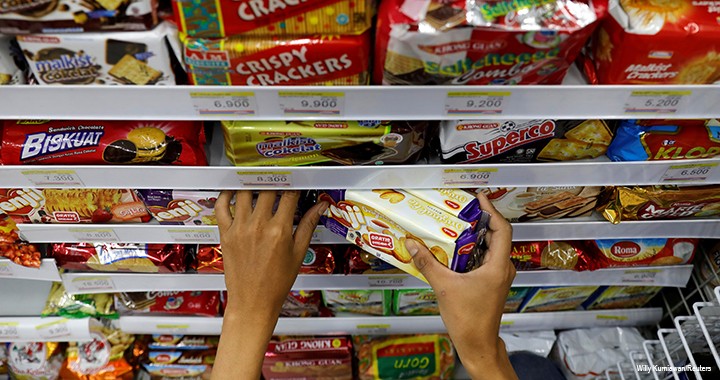 Halal traditionally refers to food preparation methods, which can also apply to the ingredients used in processed foods, like these for sale in an Indonesian market.

What makes something halal?

There remain differences in how academics and halal certification bodies define halal, which means “permissible” in Arabic. Traditionally, the concept of halal mostly referred to food preparation methods, and Muslims abstaining from consuming alcohol, blood, pork, and food contaminated with non-halal ingredients. However, in recent years halal is increasingly tied to tayyib, which means clean and pure in Arabic. With regard to food, tayyib is often referred to in the context of food safety. Food that is considered tayyib should be hygienic, exposed to minimum contamination and free from potential toxins.

Halal cosmetics
Companies producing halal-certified cosmetics do not use non-halal ingredients such as fatty acids and gelatin derived from non-halal animals, and certain kinds of alcohol, in their products. Some extend that definition to say halal cosmetics should not be tested on animals or use genetically modified organisms (GMOs).

Halal dairy
Halal cheese, for example, should not include animal rennet or pepsin, an enzyme used to curdle the milk, sourced from non-halal animals. Under the tayyib concept, what is considered halal milk, cheese, yogurt, or ice cream may start from a dairy farm where animals such as cows and sheep are not injected with growth hormones and are treated humanely.

Halal or modest fashion
Halal clothing should adhere to Muslim guidelines on modesty, where clothing items should cover most of the body for women and cover from the navel to the knee for men. Whether a clothing item is halal also depends on the raw material used. For example, shoes and bags made from pigskin leather are considered non-halal.

An increasing number of products and services have been provided for Muslims in recent years. And it’s not difficult to see the demand for such products. On the streets of Indonesia, for example, you see more women wearing hijabs, or headscarves. There are also more halal food and Islamic finance products, and the trend is not declining.

But I would argue that it’s not just about halal products and services. The bigger picture is about the Muslim community worldwide. Companies have to start asking themselves: What is the Muslim consumer trend?

Management accountants help businesses grow and improve performance. The purpose of a consumer goods company is to serve all consumers. If one consumer segment like the Muslim community is growing faster than the general population, you would expect that the segment’s consumption will increase.

Companies thinking of getting into the halal market need to also understand that merely having a halal stamp is not enough. Getting the certification is the bare minimum to make your products attractive to Muslim consumers.

To penetrate the halal market, you have to think of it from an end-to-end perspective. It starts with understanding the consumer: What do they need? Then you can work backwards from there. Here are a few things to keep in mind:

In the case of halal products, it will be the same as an analysis of other segments, like the low-end or premium segment. Treat this like a new segment. It’s not very different from trying to capture the youth segment, for example. If you’re in a market where the Muslim population is not the majority, demand for halal products will depend on macro trends like the country’s Muslim population, fertility rate, average age, and education level.

Take, for example, a Muslim woman who wears a hijab. She will most likely have her hair covered for almost 12 hours a day. What kind of shampoo and hair treatment will she need? I think those needs will be quite different from those who don’t wear a hijab. That means the current shampoo you have in your product line might not work for such a consumer.

If you’re a marketing guru, think about the four P’s — price, product, promotion, and place — with insights on Muslim consumers embedded into them. You need marketing campaigns that touch the hearts of the Muslim community. If it’s in a non-Muslim majority country, you may have to create a Muslim brand to make your story matter. If you try to use your current brand and turn it into a brand for Muslims, how would that impact your non-Muslim consumers?

Tevilyan Yudhistira Rusli, FCMA, CGMA, is the current group chief auditor at Unilever based in the UK, and formerly the CFO of PT Unilever Indonesia, overseeing an annual turnover of $3 billion.

Alexis See Tho is an FM magazine associate editor. To comment on this article or to suggest an idea for another article, contact her at Alexis.SeeTho@aicpa-cima.com.