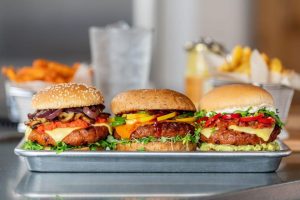 Meat is big business. According to analysis by A.T. Kearney, the global meat market was worth $1,000 billion in 2018, and this is set to grow. The World Economic Forum’s Alternative Proteins report says demand for meat will double before 2050 as our global population increases, becomes wealthier on average, and adopts food choices that are currently restricted to high-income countries.

At the same time, concerns about how to feed this expanded populace, along with the impact meat has on factors including our health, the environment and animal welfare have been steadily rising. Vegetarianism, veganism and flexitarianism are regularly in the news, with more and more people becoming advocates of plant-based eating. A study conducted by the UK research company YouGov found that one in five believes the future is meat-free.

Correspondingly, in recent years we have witnessed a sharp upsurge in the attempt to find viable alternatives. Classic vegan and vegetarian meat replacements have been a standard feature on our supermarket shelves for several years of course, while insect-based meat replacements, while available, occupy a relatively niche position.

More recently, the search has found its way into our laboratories, and start-ups like Impossible Foods, Just and Beyond Meat have brought novel vegan meat replacement, a plant-based product category that imitates the sensory profile of meat, to the table. Looking further ahead, other companies are now using advances in biotechnology to prototype and test cultured meat, which is created using cells extracted from living animals, slaughter-free.

Are these developments just the latest fad, or could they become the ultimate industry disruptor – and a potential solution to one of our most pressing problems?

We believe it’s the latter, and that the balance will start to tip away from conventional meat within the next couple of years. With the large-scale livestock industry now viewed as an unnecessary evil, and the advantages of novel vegan meat replacements and cultured meat becoming better known, it’s only a matter of time before they capture a substantial share of the market.

1. New alternatives can be created more efficiently than conventional meat.

The conversion of grain (when used as livestock feed) in dry weight to meat with similar amounts of calories is around 15% across all meat types, as most of this energy is lost in keeping animals’ body temperature constant, creating by-products and excreting waste. If by-products are considered as edible meat, the conversion rate rises to 23%. Meanwhile, novel vegan and cultured meat need significantly less material input and water to create the same amount of meat. Their conversion rates are 75% and 70% respectively.

2. Solutions for increasing the efficiency of traditional meat production are almost exhausted.

Arable land is shrinking due to global warming and urbanization, meaning devoting more land to grain production comes at the cost of valuable natural habitats such as rainforests. The availability of fresh water to maintain fertile land is another concern. According to the Food and Agriculture Organization of the United Nations (FAO) and Aquastat, global agriculture already uses around 70% of this “blue” water. The intensification of agricultural production is also reaching its limits, as resistance to modern agrochemicals rises, and intensive cropping, rotation and drainage practices have already damaged soil biodiversity. Finally, managing livestock is becoming more challenging as issues around the use of antibiotics, public health scandals and animal welfare climb higher on the popular agenda.

Cultured and novel meat replacements have a longer shelf-life than conventional meat, and need less cooling during transportation since no bacteria – like salmonella or E.coli – cause them to degrade and break down. What’s more, epidemic risks including mad cow disease and bird flu are not a concern as the production process is subject to strong quality management requirements, which will lead to greater levels of security in the supply chain. There are also advantages in terms of product design, including the opportunity to customize the ratios of muscle, fat and nutrients present.

The following table shows how these and other factors will create the potential for novel vegan and cultured meat replacements to disrupt the industry.

Right now, it’s hard to tell how quickly this disruption will come about. But we are already seeing wholesalers, retailers and consumer goods companies trying to find a foothold by acquiring start-ups or buying distribution rights for existing products. One example is the supermarket chain Tesco, which distributes the Beyond Burger from Beyond Meat.

Our research and conversations with experts in the field have led us to the following conclusions:

1. We believe around one-third of the global meat supply will be provided by these new technologies within the next 10 years, and in 20 years, only 40% of global meat consumption will come from conventional meat sources.

2. Although novel meat replacements were first off the starting blocks and will continue to be relevant during a transition period, cultured meat will dominate in the long run. It will become an alternative that is increasingly acceptable to a broader consumer base, for example those who like eating meat, but are in favour of non-slaughter and resource-efficient products.

3. Cultured meat will outgrow novel meat replacements some time between 2025 and 2040 as both technology and consumer preferences develop. In fact, the disruptive effect of new biotechnology methods will go beyond meat into milk, egg white, gelatine and fish products.

Nearly half of the worldwide harvest (46%) is currently needed to feed our livestock population, most of which produces meat for human consumption. With pressure to feed a growing world population rising, novel meat and cultured meat replacements could not only provide a viable alternative to conventional meat, they could also help to redirect our agricultural resources where they are most needed, and sustain billions more people in the process.