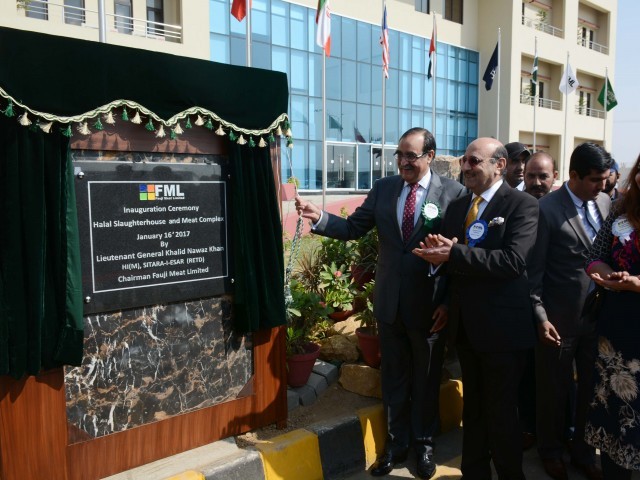 By Salman Siddiqui – The Express Tribune

“The revenue would touch Rs16-20 billion in the next 1-2 years,” Ahsan told The Express Tribune on the sidelines of inaugural ceremony of the abattoir in Bin Qasim, Karachi.

This is one of the world’s largest meat processing and exporting plant established at a cost of $75 million.

The abattoir and meat processing facility has a daily production capacity of 100 tons of meat (85 tons of beef and 15 tons of mutton) in frozen and chilled categories for worldwide export.

“You, perhaps, may not find such a big plant across the world,” said Ahsan. “This year {2017}, we will fully utilise the installed capacity,” he said.

“Our quality and processing is not less than anyone in the world,” he said. He said FML would also introduce its quality products at local markets.

FFBL’s share price increased 1.24%, or Rs0.67, and closed at Rs54.29 with 5.39 million shares changing hands at the Pakistan Stock Exchange on Monday. The increase in price was attributed to restoration of subsidy on fertilisers.

The plant is currently serving the GCC region (Kuwait and UAE) and China, and is in the process of obtaining formal approval for export of meat to Russia, MENA region and Central Asia.

Iran has given approval, while approvals from Saudi Arabia, Malaysia and Russia are in the pipeline. “We are confident that all these countries would approve during the years 2017-2018,” he said.

“The volume of sales of halal meat stands at $300 billion. Pakistan’s share in this is almost nil,” he said.

According to the Pakistan Bureau of Statistics’ latest data, the export of meat and meat preparations dropped 19% in dollar denomination to $87.56 million during July-November 2016 from $108.10 million in the same period last year.

Pakistan has been endowed with a large livestock population which includes cattle, buffalo, sheep and goat. It has a herd size of more than 60 million animals; one of the largest in the world.

Responding to a question, Ahsan said, production of 100-tons-a-day is a single-shift installed capacity. With the addition of another shift, the capacity can be doubled at a nominal investment.

The firm has engaged dozens of farmers to make quality breed available on a consistent and scientific basis.

Fauji Foundation Group Chairman Khalid Nawaz said the group started off with $0.2 million and now its annual turnover exceeds $1.5 billion, making it one of the largest business conglomerates in the country with interests in more than 18 industries and having a diverse investment portfolio.