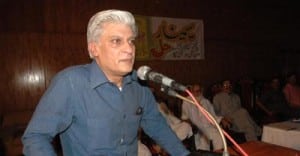 ISLAMABAD: Federal Minister for Science & Technology Zahid Hamid has said Pakistan despite having great potential in Halal food was sharing only 0.5 percent of international market as other countries’ share was $ 3 trillion annually.

The minister was speaking at a meeting held here under his chairmanship to discuss draft bill of Pakistan Halal Authority 2014.

The proposed draft was discussed in detail. Various suggestions presented by the representatives of ministries and provinces were incorporated in it.

The main purpose of the proposed act is to promote the Halal sector and ensure implementation of uniform Halal standards and thereby promote import and export trade and commerce with foreign countries and interprovincial trade and commerce in Halal articles and processes.

The draft bill was unanimously approved by all the representatives of the ministries and provinces and will be presented in the parliament for its enactment.