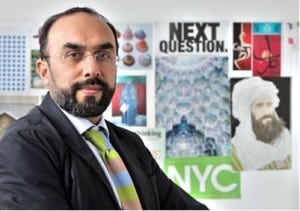 Media tends to focus on bad news. This is especially true when it comes to Islam and the Muslim world. But in London, a new media startup sets out to change this. Alchemiya, a new video-on-demand platform, will work like Netflix with a catch: it plans to showcase content about Muslim life aimed at urban Muslims. Its founder, British journalist and documentary producer Navid Akhtar, spoke with onMedia’s Jannis Hagmann about how he grew tired of reporting on extremism and what he has learned from his own media project development.

Navid, you are about to launch an online television channel that offers what you call ‘Islamic content’. Why is such a platform important?

Look at the Muslim digital real estate. It’s full of extremist noise but in terms of positive ideas, it’s empty. There are many positive stories that don’t get told. People want to hear stories of ordinary Muslims: of successful business men, Graffiti artists, fashion designers and skateboarders. They want to see that stuff, not just once a year but all the time.

Do you intentionally aim at projecting a positive image of Islam?

When you describe it like that it sounds like I have some kind of moral mission. It’s more a case of making programs that I personally enjoy. I am European, I am British, I am a Londoner. But I also have an appreciation for the architecture of the Muslim world, for its culture and literature. I want to make programs about gardens and poetry, about beauty and achievement. The market is saturated with bad news about Islam. At Alchemiya, we will be looking at people who have found solutions to all those problems.

You were born into an immigrant family in the UK and have worked for the British broadcasting industry for more than 20 years. Is Alchemiya related to your personal biography?

My parents are from Pakistan. I was the first in the family who went to university. When I first started working in mainstream media, I was doing programs about design and history. After 2001, everybody wanted me to make films explaining extremism and terrorism. So I became a specialist in that area. But I got very tired of it. I couldn’t switch off anymore. As a Muslim journalist, it goes very deep. I was afraid I’d burn myself out.

When launched, how will Alchemiya work?

We are an online video-on-demand platform very similar to Netflix. About 40 percent of our content we’re producing unique new ideas and 60 percent we are sourcing from across the world. We have found many producers who feel frustrated because they can’t get their projects commissioned. So Alchemiya will work simultaneously as a commissioning house.

You have been thinking about Alchemiya for four years. How did you put your initial idea into practice?

In 2007, I started my own production company Gazelle Media. We went to the BBC and Channel 4 but weren’t very successful. After that, we did a lot of research. I went to visit different people in Kuala Lumpur, Abu Dhabi, Istanbul and the USA and learned that there is a new market of people who are looking for Islamic content. There is a blurring demand globally for people who want to watch this stuff. Because I understand this internet space, I learned that rather than being a producer and selling to the big channels, I can actually bring the customers straight to me.

When did you start setting up your team?

About two years ago I met a trustworthy guy who has experience in ‘big finances’ and I also knew an imam. It’s odd in the business world to bring an imam in, but Ajmal Mansour provides a lot of credibility to our project. At present even more people have joined us. This is exciting for them because it’s one of the first high quality tech project for Muslims.

Looking back at the development phase, what was your biggest mistake?

I wasted a lot of money and time trying to meet big investors. In this day and age, don’t go chasing investment money. Economies have changed. First you have to develop your product and harness support from customers. Then the guys with the money will come chasing after you.

Do you have any funding?

The initial funding is coming from the customers themselves. We offered them a 2-year subscription for 100 British Pounds (130 euro). It’s a kind of ‘crowdfunding’. We have asked people an advance subscription. We’re looking for 3,000 subscribers and are about a third of the way through that. It’s all done on trust. In Islamic finance, this is an acceptable mode of financing. This has secured our control over the project. We’ve also had offers of investment but we’re accepting only small amounts. We don’t want some big investor to take control over the project.

When are you planning to launch Alchemiya?

We’re hoping to have a beta version by the end of the year. A full service will come quite quickly, after a month or so.

This interview has been edited for brevity and clarity.