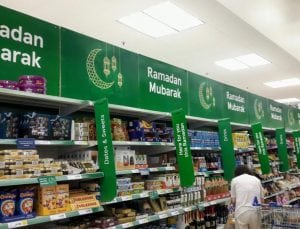 The findings also explore how British Muslims culture and lifestyle choices are rapidly shifting and how brands can play a role in developing deeper relationships with them. The research shows that food and drinks brands and supermarkets need to develop authentic creative campaigns, content and design that resonates with the four million Muslims living in Britain, especially during Ramadan and Eid.

Supermarkets, it’s time to rethink how you approach your Muslim audiences

The survey conducted with over 1,000 Muslims aged 18 – 45 living in Britain, found that they want brands to recognise their modern social and cultural contexts by meeting their demands for broader and more varied food and drink experiences, beyond the typical Arab and Indian options.

According to the research, on average British Muslims are willing to travel up to 22 minutes more to a supermarket that stocks a better halal range. When you consider that £3.5 billion is spent on halal certified food across Britain each year, there is a huge opportunity for supermarkets.

With larger disposable incomes and strong intent, Muslims in the UK remain a relatively untapped consumer group in need of effective brand engagement. The research revealed that 63% of British Muslims feel supermarkets continue to deploy outdated activations across stock, content and design and 69% of British Muslims feel that supermarkets and grocery brands don’t understand them or their families, highlighting a huge gap between brand activations and consumer relevancy.

The research revealed that many British Muslims feel that supermarkets struggle to keep up with modern Muslim customers. Efforts to target Muslims, especially during Ramadan and Eid still are stereotypical and campaigns around these religious celebrations follow a homogenous design and product approach which often feels imported, ethnic specific and culturally disconnected from modern British Muslims. In addition, British Muslims want a progressive and relevant product range that goes beyond typical Asian and Arab cuisines and widens their choices in ready meals and halal produce.

The branding gap between brands and British Muslims

The research revealed that British Muslims want their British and Muslim identities to complement one another and they are keen to expand their food experiences, since it’s a pivotal part to most social and family occasions.

Arif Miah, creative strategy director of mud orange, said: “There is a clear opportunity for supermarkets, delivery services and food and drink brands to engage with Muslim audiences. We have seen supermarkets such as Morrisons develop their Ramadan essentials food box in partnership with Deliveroo, but many are still missing the mark to build effective creative campaigns that engage and resonate with Muslims living in Britain today.

Brands and supermarkets are trailing further behind as they continue to take an outdated marketing and branding approach towards modern Muslim audiences. Unlike Easter and Christmas when brands are great at building a distinct role during the cultural moment, they’ve been lazy when it comes to Ramadan and Eid as they fail to understand the British Muslim appetite.

With Ramadan this year being significantly different due to the pandemic and lockdown, it was not the usual big family celebration and many British Muslims will be looking at how they can make next year’s celebrations even more special. Supermarkets and brands have a unique opportunity ahead of Ramadan in 2021 to build campaigns and develop branding that is fresh and impactful and doesn’t replicate the same stereotypical and isolating activations we have typically seen.”