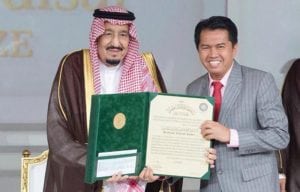 THE Organization of Islamic Cooperation (OIC) and Saudi Arabia should take the lead in promoting halal industry to cash in on its vast scope in the global market, says Prof. Irwandi Jaswir, the winner of this year’s King Faisal International Prize in Service to Islam.

“I see this most prestigious award as a wakeup call for all Muslim countries which are not seen taking advantage of the immense potential of the global halal market, whose value is amounted to trillions of dollars, by pooling their investments in halal industries,” he said.

In an exclusive interview with Saudi Gazette during his visit to Jeddah on Thursday, the renowned Indonesian scientist and researcher who dedicated his life to promote halal science, said this is the right time for Muslim countries to vigorously enter the halal market.

He expressed happiness over the recognition accorded to halal science by the King Faisal Foundation. “I never imagined to get such a global recognition from the foundation, and I hope this honor would help boost halal science and industry to have a robust growth across the world. It is extremely gratifying to note that during the meeting with the foundation officials, the secretary general explained to me that the reason for picking me for the prestigious award was something unique that I looked into verses of the Holy Qur’an from the perspective of science, and came out with wonderful outcome.”

At present, Prof. Jaswir is serving as the deputy dean of the International Institute for Halal Research and Training and Secretary of Council of Professors at the International Islamic University Malaysia (IIUM) in Kuala Lumpur. The KFIP committee highlighted his contributions in the establishment and development of ‘Halal Science’ through various publications and research studies. It also cited his valuable efforts in leading the international institute for halal research at IIUM to become a renowned center for research and services related to halal food and consumer goods.

The committee also considered his work in developing new methods for analyzing substances used in the manufacturing of ‘Halal Food Alternatives’, as well as practical procedures for producing halal gelatin from various halal (non-porcine) sources, such as camel and fish.

Prof. Jaswir was instrumental in developing “Portable Electronic Nose”, which detects within seconds the presence of alcohol in food and beverages, and the detection of lard (porcine derived fat) in them. His role was remarkable in Malaysia’s bid to become the ‘World Halal Hub’ as well as introducing halal industry to Indonesia.

Prof. Jaswir has assumed many administrative and academic roles during his rich career. He has dedicated over 20 years of research to the establishment and development of the new discipline called “Halal Science,” and that brought him 60 awards and honors.

The halal market is emerging as one of the most lucrative and influential arenas in the world. Halal is no longer just a purely religious issue, as it has become a global symbol for quality assurance and lifestyle choice, and it is a new market force that should not be overlooked. “In the present global scenario, OIC, the pan-Islamic body that groups 57 Muslim countries, and Saudi Arabia, a heavyweight in the Muslim bloc, can take a lead in enabling Muslim states to have optimum utilization of the huge potential of the hitherto untapped halal market,” he said noting that Muslims do not have a single halal certification that is applicable to the entire Muslim world.

Jaswir said halal is a huge industry at the moment with an annual market volume of $3 trillion. “However, unfortunately, Muslim countries do not pay significant attention and hold only a small stake of this market. Those who benefit from the halal industry mainly are non-Muslim countries such as Australia, New Zealand, Thailand, South Korea, Japan, Brazil and India. Australia, New Zealand and India are leading in meat industry while Brazil tops in chicken industry. In South Asia, it is not Malaysia and Indonesia but Thailand as the major stakeholder in halal food while Japan, South Korea and China are leading in halal tourism. There are 2,000 cosmetic factories in South Korea and it is 23 percent of the volume of the regional market. Now, Seoul entered the halal market and the percentage of products may go up 30 or 50 percent in the near future. Last November, I was invited to a seminar in Jakarta hosted by Korea where there were 500 Korean cosmetic businessmen who were eager to penetrate into the Indonesian market, the most populous Muslim nation.

“We, the Muslim nations, have to learn from Japan, South Korea and China. In Japan all the hotels now are making preparations to become Muslim-friendly ones well before the 2020 Olympics,” he said.

“Last December, I addressed a meeting of 500 hotel owners and they are really going ahead well in preparations,” he added.

Jaswir said around 90 percent of gelatin available in world market is non-halal, of which about 60 percent comes from porcine. “I worked closely with King Saud University in Riyadh earlier in connection with two research projects. One was pertaining to production of halal gelatin from camel hide and bones and the SR2 million project was completed last year. The second was about non-halal contamination in food especially snacks for children that are imported by the Kingdom. Malaysia imports a lot of food ingredients where the issue of halal is very critical. In Indonesia, majority of large food manufacturers are non-Muslims and so the potential of contamination of our food is high.

Indonesia has now changed its policy and started giving much attention for halal industry initiatives with budgetary allocations. “Our universities are authorized to issue halal certification. I am invited to Indonesia almost every two weeks by various universities with regard to introduce halal science. There is also demand from South Korea, China and Japan and I have traveled to these countries at frequent intervals as part of halal industry promotion,” he said.

“Since over 20 years, I focus on this vital area as a scientist and researcher. The background to do this is our region including Indonesia and Malaysia facing recurrently the problem of non-halal products made of porcine and we have to sort out this never ending problem.” He said that the Muslim friendly hospitality based tourism law was instrumental for huge inflow of tourists to Malaysia. “I plan to get it introduced such a one in Indonesia to tap the vast potential for halal tourism,” he added.