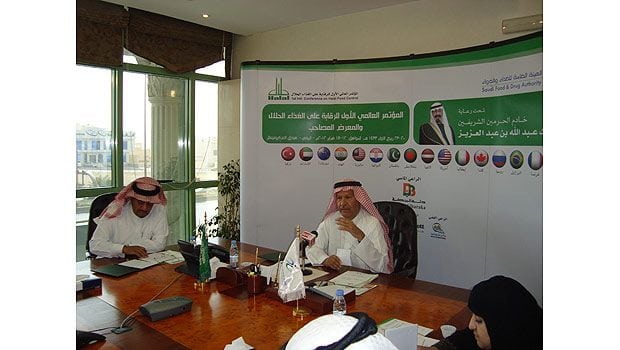 RIYADH: The Kingdom will host the first ever international conference on halal food in the Saudi capital on Sunday, Saudi Food and Drug Authority (SFDA) Chairman Mohammed Al-Kanhal announced in Riyadh Saturday .

Speaking at a press conference held at the SFDA headquarters, Al-Kanhal said the event, which will be held under the aegis of Custodian of the Two Holy Mosques King Abdullah, has attracted representatives from more than 20 countries.

Ibrahim Al-Mohizea, vice president of SFDA for the food sector, was also present at the press briefing.

Al-Kanhal said this is the first time such an event on halal food is to be held in the Kingdom. “There are around 1.8 billion people in the world who consume halal food and its global market is valued at SR2 trillion,” he added.

Al-Kanhal pointed out the SFDA has brought scientific and religious scholars to a common platform to explore new ways of improving the global halal food industry and to chalk out a mechanism to maintain a uniform check on the quality as well as the regulations adopted by the local authorities to ensure that the food consumed is halal.

The chairman said the conference will also incorporate international organizations and private institutions concerned to discuss this vital subject and request them to come up with recommendations which can enhance global trade and harmonize halal food requirements, conditions and control methods.

Al-Kanhal said the conference aims to clarify the concept of halal food and its requirements from an Islamic perspective and to present the technical and economic aspects of halal food in the light of its increased global demand.

“Besides boosting public and private sector cooperation in the relevant food industry at national, regional and global levels, it would also serve as an ideal platform for exchange of experience between countries in the field of supervision and control of halal food.”

Speaking to Arab News after the press briefing, Al-Mohizea, who is also the executive chairman of the conference, said the organizing committee received 95 scientific papers from the participating countries, but unfortunately due to time and scope limitations, only 57 papers will be presented at the conference. “They will be distributed across eight sessions and delegates will be able to exchange their ideas on various topics regarding halal food.”

He estimated that the food industry in the Kingdom produces goods worth SR250 million a day.

The official said the four-day conference is open to all irrespective of their faith. The main sessions will focus on genetically modified food, lawfulness of food additives, analysis methods of halal food, control of halal food, its standards, certification and countries’ experiences in halal food control.

There will be two panel discussions on stunning and automated mechanical slaughter and the lawfulness of food produced by biotechnology, nanotechnology and chemical changes.

He said the mission of the SFDA is to ensure the safety of food, quality and efficacy of drugs, and the safety and effectiveness of medical devices by developing and enforcing an appropriate regulatory system.

The SFDA was established under a Council of Ministers resolution as an independent body corporate that directly reports to the head of the council.

Control and testing activities are conducted at the SFDA or other contracted laboratories. The SFDA is also in charge of consumer awareness on all matters related to food, drug and medical devices and all other products and supplies.