Mataram. BioFarma, the largest pharmaceutical firm in the archipelago, is currently in talks with the Indonesian Trade 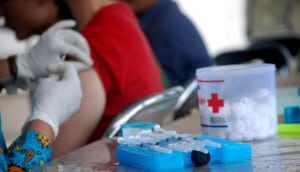 Promotion Center in Saudi Arabia to share the firm’s vaccine technology with the kingdom.

Indonesia is the only member of the Organization of Islamic Cooperation (OIC) that produces vaccines certified by the World Health Organization (WHO).

The agreement was reached in early March this year during the 11th meeting of the OIC Steering Committee on Health in Jeddah.

“Saudi Arabia has asked BioFarma to help produce vaccines independently and reduce the importation of vaccines. We will send a team from BioFarma to Saudi Arabia to teach and train them on vaccine production and send them semi-completed vaccines, which can be completed in Saudi Arabia,” BioFarma corporate secretary Rahman Rustan said on Sunday (10/04).

According to Rahman, BioFarma and Saudi Arabia began discussions on sharing vaccine technology in 2013. The discussions got more support after the Indonesian Ulema Council (MUI) certified vaccines produced in the archipelago as halal.

BioFarma currently exports its tetanus, diphtheria, and polio (DT) vaccine, and Pentabio, which is a combination vaccine for diphtheria, tetanus, pertussis, hepatitis B, and Haemophilus influenzae type B (DTP-HB-Hib), to Saudi Arabia and 130 other countries, including 49 Islamic nations.

“Indonesia has become a vaccine hub for the OIC. BioFarma produces halal vaccines and Indonesia is the only country certified by the WHO, which is why Saudi Arabia has entrusted us with the idea of sharing the vaccine technology,” Rahman added.

The regulatory authority will visit BioFarma’s headquarters in Bandung, West Java, in the second quarter of this year, as the cooperation is still in its auditing stages.

BioFarma supplies the vaccines used by the Ministry of Health in Indonesia’s basic immunization program. It also supplies 60 percent of the world’s polio vaccines.