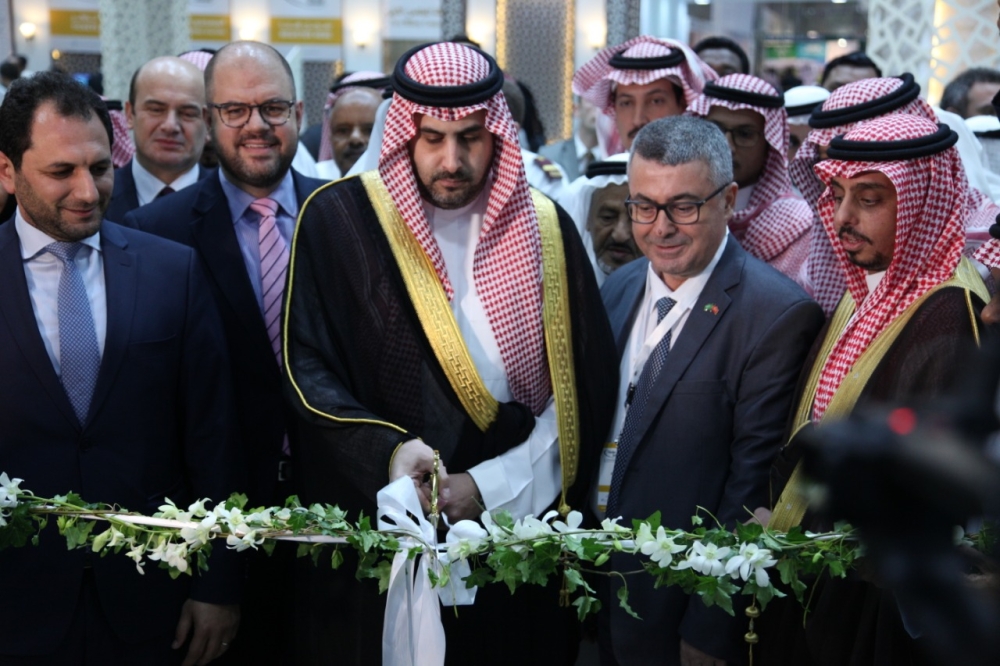 Running on Nov. 12-15, the event is the 6th edition of the show, with a wide participation of 52 countries represented in more than 500 international brands, including the latest products of fresh, chilled and frozen foods, dairy products, food services, canned goods, meat, poultry, snacks and sweets. The exhibition is open to the public and investors over 4 days.

During his tour around the exhibition, Prince Abdulaziz Bin Nawwaf Bin Abdulaziz noted that it is expected that Saudi food exports will jump to the list of non-oil exports over the next five years. This is depending on the state of great growth, which is witnessed by factories and national companies, and in light of the facilities set by the state to provide the broad concept of food security and the giant sustainable projects posed by Vision 2030.

He also pointed out the importance of concerted efforts and international partnerships to achieve broad prospects for agricultural development and sustainable food security. He stressed that the participation of 51 countries represented by 500 brands, reflects the position occupied by the Kingdom of Saudi Arabia economically and demonstrates the leading role played by the Kingdom in the Middle East as the largest and most attractive market for all investors.

He added that the achievements of the food and beverage industries in the Kingdom of Saudi Arabia during the first quarter of the current Hijri year, after the percentage of increase in obtaining licenses has reached 82% and the total funding increased by 217% according to information issued by the Ministry of Energy, Industry and Mineral Resources, which also revealed that the total Saudi exports in the food sector during the last year amounted to SR14 billion for 2017, and the sector ranked fourth in the list of major non-oil exporting industries.

From his side, the director of the exhibition, Mohammed Talaat Mohammed, stressed that the new version of “Foodex Saudi” is working to highlight the role of the major national companies to achieve the foundations of Vision 2030. He noted the wide European participation, pointing to the presence of 12 Spanish companies and the presence of great competition within the exhibition halls between the European and Asian products to win the confidence of the Saudi consumer, in a strong market with an annual growth rate exceeding 18%.

He stressed that “Foodex” has turned into a global display platform to attract the largest and most influential companies, as the Kingdom is characterized by an enormous economic and consumer capacity, and its market enjoys great flexibility and attractiveness with a wide range of consumers. Since the launch of six years ago, the exhibition has contributed to raise the ceiling of ambitions within the retail market, and contributed to the provision of many successful investment opportunities, as it contributes to the exchange of business and expertise with exhibitors and the discovery of the latest products and technologies in the food industry.

The exhibition, during its inauguration, surpassed its industrial and commercial dimensions and opened the door for regulatory and academic bodies to form a new food culture in the Kingdom of Saudi Arabia, as the Saudi Food and Drug Authority sends a series of messages through the “Foodex Saudi” platform, thereby revealing the latest standards it has set to prevent harm to consumer health, stressing the improvement of product quality and preventing the entry of any products that may affect the health of the citizen.

For its part, the College of Tourism at King Abdulaziz University participates in the activities of the exhibition to introduce its outputs and specialized study programs that meet the needs of the labor market. The Dean of the College, Dr. Nasser bin Namas Al-Baqami, affirms that their goal is to raise the students’ skills, practical experiences and contribute to the introduce the local and international decision-makers to their role in launching programs in all disciplines that support food security and achieve the foundations of Vision 2030.

The First Flour Mills Company is launching a number of new products through the exhibition in line with consumer taste and the current market requirements. The Chief Executive Officer, Engineer Abdullah Ababtain, referred to the re-launch of all products in the market in a new fashion that will keep pace with innovation and modernization, as well as revealing two new products with the aim of satisfying consumers’ desires and providing them with products that meet the highest international standards.

The participants in the exhibition are looking forward to the announcement of the winners of 9 awards for food industry innovators. The President of the World Association of Chefs’ Societies, Thomas A. Gugler, has announced receiving the nominations of the participants through its nine branches: Best Cold Drink, Best Hot Drink, Best Dairy Product, Best Product in Red Meat and Chicken, Best Product in the Bakery and Confectionery Sector, the Best Product in the Spices and Sauces Sector, the Best Frozen or Cold Food Product, the Best Organic Food Product and the Best Healthy Food Product. He stressed that the selected candidates were highlighted to visitors, specialists and pioneers of the food industry, and they were assigned a place inside the suite dedicated for the competition in the exhibition.

In contrast, the world’s most famous chefs compete for a wide range of prizes in 17 categories in a professional atmosphere at the “Salon Culinaire,” which is held under the auspices of the World Association of Chefs’ Societies and the Saudi Chefs’ Table, where 200 chefs of the world’s most famous hotels and restaurants compete in 17 categories in a professional atmosphere.