Based
on a 900-year Old Formula: This combination of natural ingredients was
originally discovered in the 12th century by Genghis Khan’s Mongol
Empire. Its efficacy in killing germs may have been a major
contribution towards bringing about the Mongol Empire’s military
supremacy. 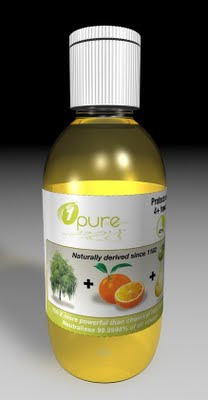 A 50ml bottle of Onepure-handgel

Crawley, West Sussex – SJK Products,
well known for its range of waterless vehicle washing products, today,
has ventured into new territory by launching yet another waterless
product; this time to wash your hands rather than your car.

Onepure-handgel
is a novel, alcohol-free, naturally derived, non-toxic, unperfumed and
skin-moisturising product which is more effective than any
alcohol-containing hand sanitisers on the market today, killing over
99.998% of all potentially infectious organisms i.e. bacteria, fungi,
yeasts and viruses. It also gives superior protection against influenza
A (flu) viruses, 99.998% of which it can kill in under 1 minute. (Full
list of pathogens that Onepure-handgel is effective against is
available upon request).

In fact, it has been proven in tests
that Onepure-handgel is 100 times more effective at killing germs and
viruses (such as E Coli, MRSA, HIV virus and all known influenza
viruses), than chemical-based hand gels. It is manufactured from
naturally derived ingredients: orange pith, olives and tree bark – the
exact same ingredients used by the Mongol Empire during the 12th
century. The Mongols had discovered that the combination of these
indigenous ingredients, when applied to a wound, could not only
sterilise the injury thus preventing the onset of infection, but also
protect against any new infections developing for many hours after.
Thus, during battles, many warriors made a rapid recovery, and were
able to carry on fighting.

Today, Onepure-handgel is ideal for
use wherever there is risk of infection from contaminated hands –
particularly relevant to the current Swine Flu epidemic. It has the
extra benefit of a long-lasting residual effect, and is the only hand
gel that provides protection for more than 4 hours after application,
(compared to alcohol-based hand gels which give protection for only 4
seconds). Therefore, 2 applications of Onepure-handgel per day in the
workplace or at school give a full day’s protection against all known
flu viruses.

Indirect benefits from Onepure-handgel is reduced
soap and water consumption, and since the product is self-drying, there
is no need for linen or paper towels nor hot air blowers to dry the
hands – thus representing a significant cost saving and reduced use of
energy and resources.

“As you can see, despite moving into a
completely new market niche, our new product has managed to maintain
the ‘waterless’ theme. But we are very excited about this new venture –
especially as we will be helping to prevent the spread of disease,”
says Tim Jones, Chairman.

Onepure-handgel has been
dermatologically tested and is suitable for use with sensitive skin and
it even moisturises the skin, whereas alcohol-based hand gels have the
adverse effect and dry the skin out. In addition, the product has more
than a decade of academic endorsements behind it, and has been approved
by the Department of Health (HPA), NHS, DEFRA, EU Organic Farming, EN
and Halal Food Authority. (Certificates available upon request).