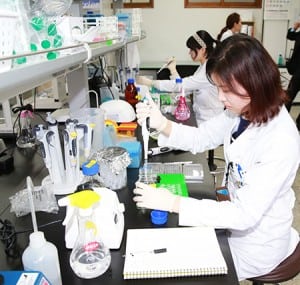 Korea wants to develop the planned food industry cluster in the southwestern region into a role model of the “creative economy,” a concept promoted by President Park Geun-hye to generate new business opportunities through the integration of different industries.

The cluster, which will serve as a strategic base for multinational food firms looking to enter China, Japan and other Asian nations, will play a role as a R&D hub for Korea’s food industry, according to Lee Dong-phil, minister of agriculture, food and rural affairs.

“Foodpolis will be developed as a R&D hub for Korea’s food industry to more effectively support companies operating there,” Lee said. “This way, it will be able to generate greater economic value and attract more businesses. The planned food cluster will become an ideal example of the creative economy.”

The ministry has and will invest a total of $500 million to build the food industry complex on a 2.32 square kilometer site in Iksan, North Jeolla Province. When completed by 2016, Foodpolis is expected to churn out $14 billion in output annually and generate 22,000 new jobs as over 150 companies and 10 research centers will operate there.

In order to make the cluster more R&D-oriented, the ministry will open three major research facilities in June 2016: the Food Functionality Assessment Center, the Food Quality Safety Center and the Food Packaging Center.

Prior to their opening, the ministry operates two temporary food research facilities at Wonkwang University in Iksan, North Jeolla Province, and Jeonbuk National University in the nearby city of Jeonju. Researchers at the facilities work together with those from food companies, which will operate in the cluster and conduct several pilot projects

Foodpolis will place top priority on developing 20 “star” products by 2020 in a bid to help companies introduce new food items, according to the ministry. It plans to use advanced biotechnologies to produce highly-functional food items and commercialize Korea’s traditional food.

“The ratio of Korea’s food R&D spending to gross domestic product is lower than those of most advanced countries,” the minister said. “Domestic food firms only spend 0.57 percent of revenue on research activities. In addition, most companies do not have enough researchers because they are small in size. We need to boost the research capability of food producers.”

The government will make more efforts to transfer the state-run R&D institutes’ knowhow and expertise to food companies, Lee said, stressing that he will do everything to help food firms utilize research knowhow to make new products.

“Our research centers in Foodpolis will work hard to develop at least 20 star products by 2020 using advanced biotechnologies and nanotechnologies,” the minister said. “We will seek to produce a wide range of functional foods targeting the growing number of health-conscious consumers not only in Korea, but also in China and other Asian countries.”

Among other ingredients, researchers are expected to primarily deal with ginseng, kimchi, fruits, vegetables, herbs and rice to make healthy food items.

“The global functional food market has been growing by nearly 10 percent over the past few years as more people seek to eat products boosting their health,” Lee said. The market has reached $400 billion worldwide. But Korea accounts for only 1 percent. We have a long way to go.”

The Netherlands, Denmark and other advanced countries, which operate a large-scale food cluster, have been developing hundreds of health-boosting food items, according to the minister, who said R&D centers in the food cluster should mobilize its resources to develop innovative products in cooperation with private firms.

He then said the research centers will cooperate with their foreign counterparts and implement joint projects.

“We should learn from advanced countries in order to become one of global powerhouses in the field of functional foods by 2025. Our researchers should be given a chance to work with their counterparts at foreign research centers and learn their knowhow,” the minister said.

Lee said Foodpolis will increase cooperation with universities and other state-run facilities nearby to create a large-scale food science belt in North Jeolla Province.

“The Netherland, Denmark, Sweden and other advanced countries have built and operate an extensive industry-academic network, a key to creating a globally-competitive food industry cluster. This is what Foodpolis needs to do,” the minister said. “So far, state-run food R&D centers, private research facilities and universities here have not been able to build a systematic network. I think Foodpolis should play a central role linking all industry players in the area.”

Rural Development Administration (RDA), the state-run agricultural research institute, has relocated to the nearby city of Jeonju. Saemangeum reclamation zone built along the coast of North Jeolla Province is being turned into an agricultural and industrial complex.

“On top of RDA and the Saemangeum zone, we have the Daedeok Science Complex just north of Foodpolis. So, if we build a food science belt linking Foodpolis with the three, we can build a mega food industry hub like Food Valley in the Netherlands,” Lee said.