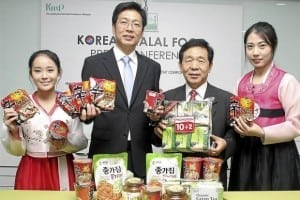 South Korean exports of food and agrofisheries products to Muslim countries have been growing solidly as local food producers train their sights on the halal market, which is widely expected to continue to grow down the road in line with the rising Islamic population.

According to data by the farm ministry, shipments of food and agrofisheries products to Muslim countries belonging to the Gulf Cooperation Council (GCC) moved up 5.9 per cent on-year to US$339 million in the January-November period. Last year, all halal food exports, including those that went to the GCC hit US$860 million.

From 2010 through 2014, halal exports rose a solid 69.3 per cent, which outpaced the 51.5 per cent growth in farm and food exports for the country overall. Besides the GCC countries, exports to Indonesia, Malaysia and Iran have all risen significantly.

In contrast, outbound shipments of food and agrofisheries products dipped 1.2 percent on-year to US$5.57 billion in the 11-month period. In 2014, Asia’s fourth-largest economy exported US$6.18 billion worth of food-related goods.

“Halal is promising because of its size, and the fact that it is a relatively untapped market for South Korean companies and farmers,” a farm ministry official said. “Many Muslim countries are keen to buy, safe and high quality products, instead of opting for the least expensive.”

In late June last year, the farm ministry announced that it hopes to push up halal food exports to US$1.5 billion annually by 2017 that can give more opportunities to local farmers and food producers.

The data showed that demand for fresh produce and grain, along with processed food, such as ginseng extract, kimchi, powdered milk, instant coffee and noodles, have all been on the rise, with all indicators showing signs of continued growth.

Reflecting such growth potential, local companies have been moving to acquire licenses to make halal food, even opening eateries that sell dishes that can be consumed by Muslims.

They have also aligned themselves with the government and state-run trade promotion agencies like the Korea Trade-Investment Promotion Agency to get the latest information on export market conditions and strengthen overseas marketing efforts.

CJ CheilJedang Corp., SPC Group, Lotte Chilsung Beverage Co, LG Ourhome Co and Maeil Dairies Co have all received permission to produce food and drinks that can be consumed by Muslims. The products these companies can make and sell range from various types of bread and dairy products to juices and processed food.

SPC said it has secured permission from the Korea Muslim Federation in 2012 to make halal food, while Maeil won a certification from the Indonesian Ulema Council late last year that is a prerequisite to selling halal food that can be consumed on the island nation.

The company said it is seeking similar certifications from organizations in Malaysia and Singapore that can further help it expand exports.

Other companies, such as Binggrae and Seoul Milk, have said their local production lines have been cleared to make halal food.

Such efforts have led to export gains with Lotte Chilsung Beverage Co., with about a 75 percent spike in sales, with Binggrae Co. and Dr. Chung’s Food Co. all reporting new sales to Muslim countries.

“With the global Muslim population on the rise, the possibility for growth is limitless so many companies are moving to develop more halal products for consumption,” an official at CJ CheilJedang said.