They serve the brand’s 47 restaurants spread across more than 20 cities in Morocco. The American brand is preparing for expansion to Egypt. 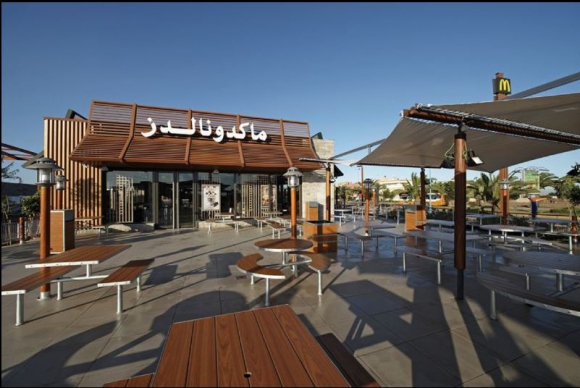 McDonald’s Morocco burgers are of Spanish origin and have double Halal certification. This is, in part, thanks to the Asturians from Grupo Norteños, who are the official suppliers of the 47 American brand restaurants spread across 20 cities in Morocco. Visualize if you had a whopping 32 tons of meat for Halal hamburgers a day, that is what the Asturians produce for their neighboring country.

Coming from the Narcea valley they have managed to become the first company, outside of Moroccan territory, to obtain the Halal labeling system certification issued by the Moroccan official agency Imanor. With Constantino González and Federico and Pedro Rodríguez Fuertes at the top. These Asturian managers channel their business through the Brand T Burger (BTB) company, which in 2017 closed with a sales balance of 6.8 million euros.

This giant of the meat industry, founded in 1983, manages large daily movement of between two and three million kilos of meat. Only with Brand T Burger, which operates from Mercamadrid (Norteños invested 20 million euros in this line after launching it in 2014), can they handle 2,500 kilos of meat per hour for Morocco. It comes from the Madrid North slaughterhouse of San Agustín de Guadalix  and the other one is in Talavera de la Reina.

More than 40,000 tons are moved per year; in the Central Market of Meat of Mercamadrid there is a production of 130 daily tons of finished product. They have a warehouse specialized in game, delicatessen and meats for hotels, and a distribution plant in the Central Market of Malaga. The firm also has a slaughterhouse dedicated to the slaughter of sheep, cattle and goats in Casablanca (Morocco). 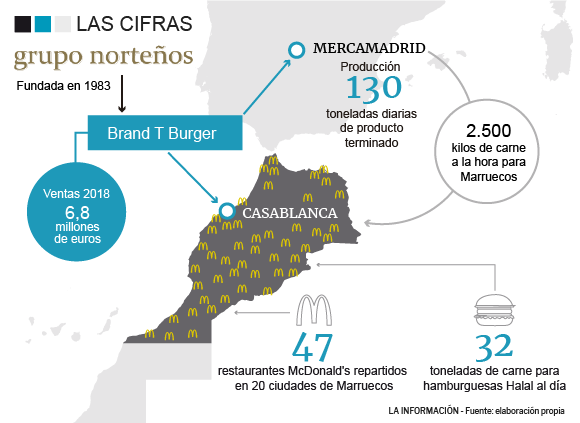 For its part, Brand T Burger (BTB) concluded the year by touching 7 million in sales, while other lines of the firm, Central de Carnes Premium (CCP), that serves large stores such as El Corte Inglés, Makro or Dia, exceeded 42 million euros of turnover last year, according to company data.

Spanish meat has been optimistic for 2019, where it expects an increase in turnover of all its companies between 20% and 35%. In global lines, Norteños exports to Europe, Russia and North Africa. Thus, 35% of the sales of Central de Carnes de Madrid Norte is already carried out abroad, while in the case of Brand T Burger it is 100%, since it is the company destined for McDonald’s Morocco.

Halal, is a booming market in Spain and Grupo Norteños are not the only ones to have seen the potential in the Halal meat business. It is a concept that has surpassed its religious connotations, become synonymous with quality, healthy and sustainable products and services.

The Halal Institute, based in Córdoba, reports the boom in this market: the number of Spanish slaughterhouses has gone from 28 authorized in 2010 to 86 in 2019. And the requests are increasing. For example, the data of Mercabarna, the wholesale market of the Ciudad Condal, which is the only large Spanish market is fully authorized by the Halal Institute. Here and in Catalonia the autonomous community with the highest Muslim presence in Spain, 62% of sacrificed lamb follows the precepts of Islam which amounts to 3,043 tons of meat. With the veal, the figures are similar: 56% percent (9,462 tons) of Mercabarna have the certificate of halal meat.

Remember that all foods are halal, except those identified as Haram by Sharia, such as pork, improperly slaughtered animals, ethanol and other toxins, carnivorous animals, blood, contaminated and dangerous foods, etc. This industry not only includes the food sector, it also includes tourism, banking, drugs, fashion and cosmetics.